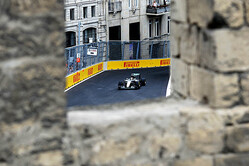 The teams today got to grips with the second-longest track on the calendar, which contains a number of unique characteristics such as an extremely high top speed in excess of 350kph.

As a result, the priority was track familiarisation and data collection with all three P Zero tyres nominated: medium (used only for FP1 installation), soft and supersoft, which different teams ran during the course of both sessions. As expected, there were warm temperatures and a high degree of track evolution with an extremely slippery surface at the start of the day in particular. In the afternoon, conditions were more overcast.

Following FP1 a problem was identified with the kerbing, resulting in damage to some of the rear-left tyres, but with no deflations or loss of pressure. The problem was rectified prior to FP2, although the race director advised drivers to stay off certain kerbs, which will be fixed tonight
Mercedes driver Lewis Hamilton set the fastest time of the day, establishing what is currently the lap record on the supersoft tyre, during FP2.

There is a performance gap of a second between the soft and supersoft tyres for now, but with the track still evolving so rapidly, the definitive gap - and therefore the likely race strategy - will only be seen following FP3 tomorrow.

Paul Hembery: "Baku has proven to be a different challenge compared to the majority of circuits we visit. Being a new track, initial running was on a slightly dirty surface that evolved throughout the sessions. The high winds weren't helping today as teams searched for the ideal set up to maximise performance and maintain tyre performance in the optimal window. We will now compare our actual running data to the pre-race simulations in order to understand any differences between the two."