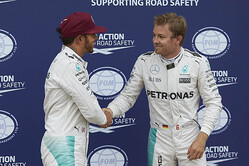 Though Lewis Hamilton topped the timesheets in both sessions yesterday, in this morning's cooler, slightly damp conditions the Briton could only manage fifth.

That doesn't indicate any loss of form, rather the fact that the changing conditions and temperatures are reflected in performance.

The cool temperatures mean that drivers are having problems trying to get their tyres up to the optimum temperature, and the likelihood that this will continue for the remainder of the weekend.

Though Red Bull appeared to lose ground to Ferrari - and Mercedes, naturally - yesterday, Ricciardo and Verstappen were both looking a whole lot better this morning.

Even Raikkonen looked good earlier, as Ferrari looks to be benefitting from the introduction of a new turbo this weekend.

Honda has finally updated its engine and this appears to be paying off. Alonso was eighth earlier, whilst Button, who exactly matched Bottas's time in FP2, was only marginally slower than the Finn this morning.

As for Renault, whilst Palmer is happier with his car today, teammate Magnussen suffered a strange accident that brought this morning's session to an early end.

If yesterday's session were, as we claimed, inconclusive, this morning's session only served to further muddy the water, and with the uncertainty due to continue this afternoon and tomorrow, maybe it's best to simply sit back and enjoy it all.

Despite its best efforts to repair his car, Renault has opted to build a spare chassis, the one used by teammate Paler earlier this season. As a result the Dane will not take part in qualifying and will start tomorrow's race from the pitlane.

The chance of rain is 30%, which in many ways is non-committal, and like the low temperatures, adds to the frustration.

"The weather is very unpredictable," admits Ferrari, "it could be rainy from the beginning or later."

The lights go green and the Ferraris lead the way, followed by the Mercedes duo and pretty much everyone else.

Such is the desire to get a banker lap in, Vettel is trying pass Hamilton to get some clear air, whilst Rosberg is all over the back of the Ferrari.

Replay shows a piece of sidepod fall/fly from Haryanto's car.

Raikkonen posts the first time, and as he wasn't involved in the tussle with the Mercedes duo its better than anything his teammate or the Silver Arrows can manage. That said, when Haryanto goes second it's obvious the times are going to tumble... and tumble they do.

Of the second wave, Rosberg goes quickest, ahead of Vettel, Hamilton and Raikkonen. All drivers bar the force India duo are on ultras.

The Force India duo, on the supers, go eighth and eleventh.

A massive lock-up for Haryanto at the final corner meaning the Manor driver has to miss the chicane.

As Verstappen reports "drizzle" on his visor between Turns 5 and 6, Ricciardo posts 14.261 to go fourth and the Dutch youngster 14.601 to go seventh.

"Some drops of rain pretty much everywhere," reports Perez. Like all but his teammate, the Mexican is now on ultras.

Palmer shaves a layer off the Wall of Champions as he fails to improve on nineteenth.

Kvyat improves to eleventh with a 14.829, the Russian, like Magnussen, bringing a three-place grid penalty here from Monaco.

Haryanto clouts the wall at T4 which shatters his wheel. Somehow he keeps it out of the barriers on the other side of the track and attempts to get back to the pits. Unable to do 'a Villeneuve', he eventually parks up.

As if the yellow flags brought about by Haryanto aren't enough, efforts to improve are further thwarted by a rain shower.

The brief shower having seemingly moved on, nonetheless drivers are keen to get out and get another banker for Q2, Hulkenberg leading the way. Again, the ultras are the order of the day.

Soon, all but the Williams and McLaren drivers are on track. Looking at the sky, that's a big gamble by both teams.

However, the session is red flagged when Carlos hits the wall on the pit straight. Having avoided the main part of the Wall of Champions, the Spaniard starts to lose it and then becomes a passenger as he continues on to the grass and thence in to the wall.

As Sainz makes the very short walk back to the pits, helmet firmly in place, the Toro Rosso mechanics, like their Renault counterparts, face a long, long night.

The session resumes and the Williams duo lead the way, followed by the Mercedes.

Aware of the chance of further rain, all are on ultras, the Mercedes duo sporting a used set, the rest on brand new tyres.

The Williams duo improves, as does Verstappen, who goes fifth whilst Vettel drops down to eighth.

Hulkenberg's 14.364 demotes Vettel to ninth, the German subsequently improving to seventh with a 13.857.

Hamilton, Rosberg, Ricciardo and Bottas, the top four, appear to have settled, as have Raikkonen, Massa and Hulkenberg.

Perez and Gutierrez have a little moment at the hairpin as Kvyat posts 14.457 to go tenth.

Gutierrez improves to 14th with a 14.656, just ahead of his Haas teammate.

Whilst Vettel has settled, Raikkonen is back on track, as is Massa, with under a minute remaining.

Hulkenberg improves to tenth which drops Kvyat into the drop zone.

By the skin of his teeth Perez grabs tenth, but his teammate could yet demote him. Indeed, the German goes ninth with a 14.166.

Told he is through to Q3, Alonso responds "Whoo!" No Hoo, just "Whoo!"

Ricciardo is ready and waiting at the end of the pitlane for the start of Q3, the Australian clearly sniffing a second successive pole. The Mercedes duo is right behind.

Soon all but Raikkonen and Massa are on track, the pair looking likely to go for just one run.

At the start of his first flying lap, Hamilton misses the final chicane.

However, on the second flyer the purples start appearing on the timing board.

"I think I brushed the Wall of Champions," reports Vettel, "just enough to take a little bit of lacquer off the rims, but the car is fine."

Raikkonen and Massa finally head out, followed by Vettel and, in time, the rest.

Next time around, whilst Massa fails to improve, Raikkonen goes sixth with a 13.579.

Vettel, pushing hard, posts a PB in S1, maintaining the pace in S2. However, Hamilton goes quickest in S1.

Despite another purple in S3, Hamilton doesn't improve, while teammate Rosberg aborts his lap having made a mistake at the start of the lap, and dives into the pits.

Ricciardo takes fourth (13.166), with Verstappen unable to eclipse his teammate.

"I tried guy, I tried," says Vettel, "I lost a bit of traction out of the hairpin."

Replay shows Ricciardo clouted the Wall of Champions on his final, fastest lap.

With a very good chance of rain tomorrow, we could be in for a cracker, with Vettel's late charge this afternoon giving Mercedes something to think about. Furthermore, if not for that mistake, might Rosberg have toppled his teammate.

Like the legend it is named after, the Circuit Gilles Villeneuve rarely fails to excite, and tomorrow we could be in for another classic.