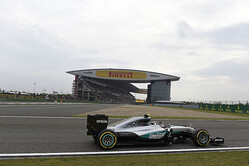 Following the warm conditions of yesterday, this morning the rain came down in Shanghai. As a result, the teams used the full wet and intermediate tyre for the first time since the FP1 in Melbourne, before conditions dried up for qualifying in the afternoon. Various mechanical incidents and driver errors made for an action-packed qualifying session at the demanding Shanghai circuit, where Mercedes driver Nico Rosberg emerged with pole position. With Hamilton not qualified after Q1, Mercedes driver Nico Rosberg ran the soft tyre in Q2, meaning that this is the compound he will start with tomorrow.

Paul Hembery: "The rain in the morning added a different dimension to the action today, complicating the strategy at what is already a complex race by depriving the teams of dry running before qualifying. That may have been one of the reasons why we saw such an action-packed qualifying today, with some incidents that have helped to shake up the grid for tomorrow, as we returned to the previous system of qualifying. The supersofts clearly have a speed advantage here, but there is scope for an interesting alternative strategy by starting on the soft, as Nico Rosberg has shown. There are a couple of potential three-stops winning strategies in play for the race: the teams will have to be reactive, so we expect to see a wide variety of different tactics in play."

With the teams having comparatively little slick tyre data to go on, the strategy calculations for the 56-lap race have taken on a new twist. The rain also has the effect of washing any rubber that has been laid down off the surface, which again affects tyre behaviour.

Tyre wear and degradation in China is traditionally high, so the optimal strategy should theoretically be a three-stopper: start on the supersoft and then change to the soft on laps 11, 26 and 41.

An alternative strategy (Rosberg, for example) would be to start the race on soft, run soft for the majority of the race (changing around lap 16 and 31), and then put on the supersoft for the final stint around lap 46. Am S/S/S/Mediuum strategy looks interesting but slightly slower.