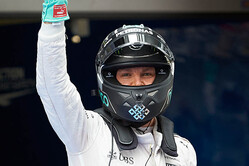 On the evidence thus far it would take a very special fortune cookie to predict what the outcome might be this afternoon, far less tomorrow.

Yesterday's opening session was compromised by red flags following the suspension and bodywork issues encountered by Kevin Magnussen and Felipe Massa, whilst this morning's session was held in the wet. Indeed, only 14 drivers opted to post times this morning.

With further rain forecast this afternoon, but a dry race, the teams are in a difficult predicament, especially Mercedes where Lewis Hamilton has already incurred a 5-place grid penalty after his team opted to change his gearbox.

Nico Rosberg was quickest in FP1, Kimi Raikkonen in FP2 and Sebastian Vettel in this morning's wet session, so all in all a pretty mixed bag.

Ahead of today's qualifying session the air temperature is 22 degrees and the track temperature 24 degrees, and whilst it has stopped raining and the sun is slowly breaking through, we are assured it will rain again, though currently it is said the threat is only 30%.

Despite the uncertainty over the weather and pecking order, one thing we can be sure of is that after the shambles that was Melbourne and Bahrain, we have the old (2015) qualifying format back and we will be keeping it for the remainder of the season.

Of course, the fact that it isn't currently raining, only threatening, further adds to the pressure on the teams, as there was little meaningful preparation in FP3 and tomorrow's race is almost certain to be dry, so essentially anything can happen. And probably will.

Tyre options are supersoft, soft and medium, the softest compound making its debut here. Whilst the supers will be the go-to tyres for Q3 for those who do qualify at the front of the grid this will mean stopping as early as lap 5 tomorrow.

The lights go green and Hamilton leads the way, followed by Haryanto, Rosberg, Button and Gutierrez. All but the Manor driver on Inters, the Indonesian on supers.

"The track is dry, so far," reports Hamilton.

Palmer and Magnussen head down the pitlane on softs.

As the Manor duo, both on supers, trade fastest sectors, Wehrlein comes to grief, the German losing the Manor as he exits the final corner.

"Sorry guys, that it," he apologises. "No chance to do anything."

Replay shows Wehrlein coming out of the final and heading down the pit straight. He runs a little wide on the exit but then loses the car after hitting a bump on the straight, which is quite damp. The German, who was using DRS at the time, spins, slides across he track and clouts the barriers.

"Just to conclude, the circuit is completely dry," says Vettel, other than a couple of wet patches, which are negligible."

Before Wehrlein's off, a number of other drivers were on the supers, it will be interesting to see the tyre choice once the session resumes.

An official vehicle is sent to the scene of the incident - where the car has been lifted on to the back of a tow truck - to see if the track can be dried a little quicker.

Race Control announces that the session will resume at 15:25.

The lights go green (again) and Gutierrez leads the way, the Mexican on supers. He is followed by Button who is also on the red-banded rubber.

Gutierrez crosses the line at 1:40.262 but Alonso is on a hot lap, having posted purples in the first two sectors. However, it is teammate Button who is quickest, the Briton posting 38.324 and the Spaniard 38.451.

In the Mercedes garage, lots of work going on on Hamilton's car, the Briton thought to have an engine issue.

Grosjean goes third (39.529), ahead of Ericsson, Palmer, Nasr and Gutierrez.

"There's a car parked at the entrance to the pits," warns Button, "if anyone goes off they're going to hit it." Said vehicle, ironically, being a rescue vehicle.

With just under six minutes remaining, the big guns come out to play.

Hamilton heads back to the pits having failed to post a time, the Briton thought to have a hybrid issue.

Replay shows Hamilton being forced wide on his return to the pits, the Mercedes driver's life made all the more difficult by Verstappen.

"We're looking for a Eureka moment," Hamilton is told. With the clock still s=ticking it's not looking good.

As Hamilton looks to have missed the cut, along with Wehrlein, the Lotus duo and Haryanto look likely to join him at the back of the grid.

That said, Palmer improves to seventeenth, dropping Nasr into the danger zone.

Magnussen improves to sixteenth, and Nasr fifteenth, as attention focusses on Ericsson. The Swede posts a mighty 38.321 to go 13th, which eliminates the Renault duo.

"It's unfortunate," says Hamilton, "but these things happen. I'll give it everything I've got."

The lights go green signalling the start of Q2, but there's no sign of any action.

Eventually Nasr heads out, followed by his Sauber teammate. Surprisingly, Rosberg is next out, and whilst his rivals are on supers, the German is on plain old softs.

Perez (supers) goes second with a 37.149, almost a second off Rosberg's pace.

Hulkenberg third and Button fourth, as Rosberg looks likely to make it through to Q3 without reverting to the supersoft rubber.

Verstappen splits the Force Indias with a 37.265 to take third, only to be demoted by his teammate who posts 37.204.

The Ferraris head out but clearly don't have the confidence of Mercedes, both are on supers.

Despite being on the harder rubber, Rosberg is only 0.122s off Raikkonen's pace.

Clearly not feeling safe, the Red Bull duo head out again. Indeed, all but Rosberg and the Ferraris are on track.

Out comes the red flag as Hulkenberg loses his left-front wheel at T10 at T3. "It's gone off," says the German. Looks likely that the wheel nut wasn't secured.

As Race Control confirms that the session will not re-start, Hulkenberg's errant wheel impacts the hopes of a number of rivals.

Told the session is over, Alonso vents his frustration. Teammate Button is equally miffed.

The Stewards announce that the Hulkenberg incident will be investigated, citing it as "releasing a car in an unsafe incident".

The lights go green for Q3 as Perez is first out of the trap, followed by Rosberg, the German now on the supers.

As the remaining ten begin their first flying laps of Q3, the cameras pick up on the Mercedes of Hamilton, sitting alone on its stand in the garage. A cordon around the car confirming an ERS issue.

Replay shows Perez lucky not to suffer a Wehrlein-type incident on the main straight.

No sooner has Bottas gone second than he is leapfrogged by Sainz and then Ricciardo.

Raikkonen posts 35.972 to take provisional pole, the Finn 0.139s quicker than Rosberg. Teammate Vettel looks as if he is only going for one run.

Kvyat is currently fourth (37.024), despite running wide in the final corner and almost losing it on the damp artificial grass.

Bottas heads out for his final run, he is followed by Ricciardo, Rosberg, Kvyat and Verstappen.

A PB in S1 for Bottas as all nine (Hulkenberg's car is out of the session) are on track.

Rosberg goes quickest in S2 while Vettel can only manage a PB in S1.

A day of mixed fortunes for Mercedes then, where Hamilton's issues are compounded by Rosberg's continuing revival, which shows no sign of abating.

And then there's Daniel Ricciardo, who once again performs well above his car's ability.

As for Ferrari, the Maranello has clearly missed a solid opportunity to take advantage of Hamilton's woes, the Maranello not even able to get one car on to the front row.

With much improved conditions we can expect a good race tomorrow, as Rosberg seeks to build on his world championship lead, Ferrari aims to use tyre strategy to its advantage and Hamilton gets to race the rest of the field.