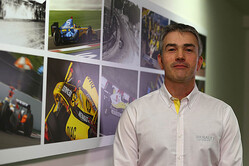 Two races into the season, what are your observations of watching the team in action?
Fred Vasseur: Honestly, I can say I am impressed. The push and drive from the team is strong. That is not to say there are not improvements to be made. As everyone is learning, I am a stern taskmaster and there are many elements and details we'll address. The key to success in motor racing is not just one aspect, it's focusing on every detail. By making many small improvements we will work forwards.

Where do you rate the performance on track?
FV: We are generally where we expected to be, but equally some way short of where we all want to be. We know it's a long term project, but that doesn't mean we will sit back. I want everyone fighting as hard for the position in front whether it's P10 or P1. That's how we'll regain the success we want. In terms of race pace there are positive signs; we're not so far from Williams and we're not so far from finishing with points.

This is a long term project; how much is the focus on this season and how much on the future?
FV: Either way, the focus is on being successful and delivering our maximum. We know that it's unlikely that we will be on the podium or win races in 2016, but that is certainly our longer term aim. That doesn't mean we are sitting back. We are determined to get the very best results at every race. We are racers, we will push.

What did you think of the driver performance in Bahrain?
FV: Kevin's race was similar to the one he had in Melbourne. He started from right at the back and pushed all the way. He showed strong racecraft and delivered a consistent mistake-free race. We know he is well aware of the weighbridge rules for the future so we're confident we won't get the same penalty again. Jolyon on the other hand was not able to demonstrate his performance and that's because of a component on the car failing. Clearly no-one wanted this to happen and it's something we are addressing. We're all very sorry there was just one car in action for the race.

What are the next targets?
FV: We have finished both races so far as the first car outside of the points so inside the points is where we need to be. For this we don't only need to add performance to the car, we need to ensure our weekends are mistake-free in every aspect.

What's the challenge of the Shanghai International Circuit?
Nick Chester: China is an interesting circuit in terms of layout. The sensitivity is akin to the first two races, in that they're all heavy power tracks so the relationship between drag, aero and power are similar but they each have unique aspects. The high speed first corner leading into tighter turn two and three is challenging for drivers with a variety of possible driving lines.

What went wrong for Jolyon in Bahrain?
NC: It was a hydraulic pump that failed which is an extremely rare occurrence. The pump was just over a tenth of the way through its normal working life; usually if a component fails it's very early in its life or near the end. We're working with our supplier to ascertain the cause and have quarantined the batch of components until we can understand the issue. It was a great shame for Jolyon to have missed the race like that.

What's the feedback from Kevin's race?
NC: It was good race from Kevin to finish just shy of the points from a pit-lane start to eleventh. He didn't put a foot wrong and the three-stop strategy worked well. The R.S.16 performed well on the super softs in the race. Were it not for the penalty, Kevin should have started from a reasonable position on the grid and that could well have led to points.

Where's the performance of the R.S.16 relative to the opposition?
NC: On race pace there's a very close group in the midfield; we saw this in Australia and we saw this in Bahrain. It means we need to maximise every opportunity we have and every performance increase we can find could mean the difference between finishing just shy of the points or scoring. Our qualifying pace has been behind our race pace in relative terms, so this is an area of focus, but one which goes hand-in-hand with the target of overall performance gains.

How much has been learnt with the new tyres and tyre rules?
NC: We're learning the compounds and how best to manage the potential allocations. It's not been a huge surprise that everyone tends to run more on a softer compound than last year. There are different strategies available for those who want to do a stop less and run on a harder compound like we saw in Bahrain. There's some variance but generally teams are dropping down one compound.

Anything in the treat cupboard for round three?
NC: We do have some small aero parts to try, however we will have more further down the line with more aero and engine updates which should mean a tangible step forward. There's a tight spread of cars ahead of us so we don't need a lot to make a decent improvement.