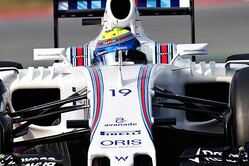 Felipe Massa finished eighth and Valtteri Bottas ninth in today's Bahrain Grand Prix. After an excellent start, Valtteri found himself battling with Hamilton into turn one, but after they collided he was subsequently awarded a drive-through penalty and sustained damage to his front wing, which hindered his strategy and pace. Felipe also had an excellent start, running P2 after the first lap, but a lack of pace on the medium compound tyre meant that he ended in P8.

Felipe Massa: I had such a great start, going from seventh to second, but unfortunately the two-stop strategy didn't work as expected and our pace on the medium tyre was not very good. This allowed others on softer tyres to get ahead and stay there. We started the weekend expecting more so it's been a disappointing result, but hopefully we can learn from this weekend and have a better result in China.

Valtteri Bottas: I was expecting more from today and finishing ninth is a bit disappointing. I had a mega start, but unfortunately collided with Lewis in turn one which was a shame as it cost us both positions. The drive-through penalty then compromised our strategy a bit so it was always going to be difficult after that. I also damaged my front wing in that collision with a big piece missing which didn't help our pace. The first two races of the season haven't been great for us but we're keeping upbeat and head to the next race hoping to make up for it.

Rob Smedley, Head of Performance Engineering: It was a very tough day. It was disappointing as it's not even close to where we should be. We've got a great deal of work ahead of us and we need to face that challenge head on. Compared to our qualifying pace which was reasonable, our race pace just wasn't there. Valtteri picked up some damage in the first lap in what the incident with Hamilton which obviously affected his race pace. He then got a drive-through penalty. Felipe's race pace in the second stint on the medium tyres wasn't great, so we need to understand what has happened there as well. Overall, this was quite a difficult day for us, and one we need to recover from to come back stronger. We've got China in two weeks, so there's a great deal of work ahead for all of us at Williams.