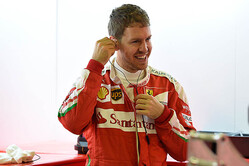 Nico Rosberg was quickest in both of yesterday's session, the Mercedes showing awesome pace. Indeed, third placed Jenson Button - yes, Jenson Button in the McLaren - was 1.280s off the pace and fourth placed Max Verstappen 1.405.

Sebastian Vettel suffered a loose wheelnut which brought his session to an early end, whilst Kevin Magnussen was penalised for ignoring calls to go to the weigh station, the Dane will now start Sunday's race from the pitlane.

Following reports that Ron Dennis has been seeking to get Fernando Alonso back in the MP4-31 this weekend, Sky pundit Johnny Herbert suggested the Spaniard has lost his mojo and should retire. Moments before the start of the session, Alonso approaches the Briton, "you ended up a commentator because you are not world champion" Ouch!

Talking of noses - including those put out of joint - Williams has a brand new nose and front wing this afternoon having flown it in from the UK overnight. Unfortunately, the Grove outfit only has one available, and Massa has it, albeit covered in flo-vis.

The lights go green and Gutierrez leads the way, followed by Wehrlein, Grosjean and Nasr.

"Car sounds a little bit different to normal," says Button. Could be they've put the Honda back in after running the Mercedes yesterday. Joke.

More and more drivers take to the track, most on the soft tyre, a few on the medium.

Ten minutes in and Ricciardo (softs) posts the first time of the day, the Australian crossing the line at 1:34.726.

Haryanto is the fourth driver to post a time, the Indonesian going third with a 36.431.

Hulkenberg makes it a force India 1-2 when he posts 34.320. Elsewhere, Vettel is held up by Verstappen. Clearly frustrated, the German eventually makes a move on the teenager.

As Vettel goes fourth (34.909), the Mercedes duo head down the pitlane.

Bottas is the first driver to switch to supers, Magnussen following suit.

"There's something wrong with the engine," warns Verstappen.

Told to "stay out", Verstappen says "I am draining the battery like hell".

On softs, Raikkonen goes quickest (32.863), 0.179s quicker than Bottas on the supers and 0.287s quicker than Rosberg and Hamilton who were also on the softs.

Massa (supers) goes fifth (33.363) as, after twenty-nine minutes, all but Gutierrez, Button and Vandoorne have posted times.

Gutierrez complains of "traffic problems with Lewis... I don't know what the hell he is doing because it was the same the other day".

Button goes 17th (35.782), but he is on the mediums. Still no time from teammate Vandoorne... maybe he's arm-wrestling Alonso for the keys.

At which point, with eighteen minutes remaining, the Belgian heads down the pitlane on mediums.

On the supers, both Renaults are 2s off the pace.

As Vandoorne posts 36.041 to go eighteenth, the Mercedes duo head down the pitlane on supers as focus finally switches to qualifying.

All eyes on Raikkonen who has now switched to the red-banded rubber. The Finn is quickest in S1, and again in S2, finally crossing the line at 31.723 to go quickest by 0.381s. Where did that come from?

Vettel begins his first lap on the supersoft as Bottas improves from sixth to fourth (32.675).

Unseen, Grosjean has gone sixth and Kvyat seventh, as Button heads out on the supers.

The Briton improves to thirteenth (33.704), 2.021s off the pace. Moments later Vandoorne goes fourteenth with a 33.744, just four-hundredths off his veteran teammate's pace.

The session ends as Palmer limps back to the pits with a puncture, having run wide earlier.

Worth noting that the Toro Rossos and force Indias didn't run the supers, instead sticking with the softs.