No curbing the enthusiasm for Vettel 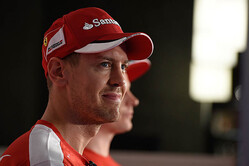 Third (and fourth?) in the driver rankings and runner-up to Mercedes in the constructors', it's been a fairly good season for the Maranello outfit, certainly compared to 2014.

Reflecting on his first season with the legendary team, a season in which he gave it three wins, Vettel feels it all went quite well, noting a clear improvement in the team's approach in the last twelve months..

"I think it's pretty clear things have changed inside Ferrari compared to the year before," he told reporters in Abu Dhabi. "People are much more fired up and there were big changes over the winter with new talent on board and people shifting positions.

"Big changes are not easy to digest for a big team," he admitted, "but I think we managed things pretty well throughout the season to improve the car, the engine, the power unit and we can be pretty happy."

Asked to score the season, he said: "I'd only give ourselves a ten if we would have won the championship, but considering all the things I've just explained and the difficulties we had at the start of the season I'd mark this season between a seven and a nine."

Asked his worst moment of the season, there was no hesitation.

"Crashing into the barriers in Mexico and having the spin before, so it was not a good race in spite of the pace we have," he admitted.

"For the best one I think I'll have to choose Malaysia. The week before I had a highlight starting the season with a podium in my first race with Ferrari. To follow that one week later with a win was fantastic. I was happy on the podium a couple of times before but that one felt really special."

Elsewhere in the paddock, teammate Kimi Raikkonen wasn't quite as enthusiastic.

"Pretty average, I must say," he replied, when asked to rate his season. "Better than last year but still far away from what it should be. But there's life and next year we'll try again."