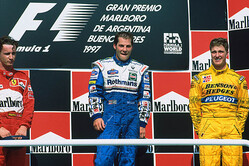 Bernie Ecclestone has hinted that Argentina could return to the F1 calendar.

Other than providing the sport with one of its true legends, Juan Manuel Fangio, over the years Argentina has hosted a round of the Formula One World Championship on 21 occasions between 1953 and 1998.

The event in 1999 was cancelled at short notice whilst plans in 2013 to take the race to the seaside resort of Mar del Plata came to nothing. Indeed, a frustrated Bernie Ecclestone admitted "we are open to racing in Argentina when I can deal with serious people".

It would appear that at last Ecclestone has found some "serious people" to talk to, for yesterday he admitted that a return is a distinct possibility.

"It can happen. Not will, can," he told reporters.

Ahead of Mexico's first Grand Prix since 1992, Ecclestone (top: watching the president of Mexico embrace local hero Sergio Perez) said that other promoters around the world could learn much from the work carried out at the Mexico City track.

"It's incredible," he said. "All these countries in a little bit of a financial problem are getting the job done. This is when some of our people in Europe, who complain about things, realise what people like these do to promote the race and make it happen and compare it with what they do.

"For them mostly, Sunday night when the race finishes that's it," he added. "They remember it sort of a week before next year's event. We should get some of the European promoters to come to these races and have a look and see what they should be doing."

The European events he refers to are those in Germany, Italy and Britain, where promoters are struggling with ever increasing hosting fees. The unwillingness (inability?) of fans to pay the resultant increase in ticket costs not helped by the fact one team has effectively dominated the sport for the last two seasons and looks likely to continue in 2016. Whilst Italy and Britain are under threat, Germany was dropped from the calendar this year - though it returns in 2016 - and France still shows no sign of a return.

On the other hand, most of the new additions to the calendar are financed by wealthy governments who feel that a Grand Prix provides a positive image, a little glamour and prestige, even if locals have little or on interest.

Virtually guaranteeing that, as editor Chris Balfe previously predicted, Mexico will receive FOM's award for best event of the season, Ecclestone suggested that its return to the calendar is not temporary.

"It was long-term before and it will be long-term again," he said of its contract.