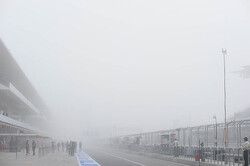 According to Austrian meteorological service UBIMET, Texas is looking forward to the biggest rain event for months and F1 activities in Austin will be affected.

The combination of a low pressure system from the West and the advection of a lot of moisture from the Gulf will lead to widespread and partly heavy rain from Thursday on till Saturday.

On Friday, heavy, partly thundery rain is expected throughout the day in Greater Austin. "During both sessions, Practice 1 and Practice 2, the racers will see quite damp and wet conditions on the track“, predicts F1 Chief Meteorologist Steffen Dietz. Due to the compact clouds and the rain, temperatures won't change too much during the day. After 22 degrees in the morning they will rise up to 25 degrees in the afternoon.

On Saturday, a strong frontal system will arrive in Austin and cater for very unsettled weather. Overcast skies and partly heavy rain with high precipitation rates will affect the track, particularly before noon.

"During the afternoon some further, but weaker showers are still expected, so the starting grid could easily be jumbled by the rain too“, says Dietz. Again, a maximum value of 24 degrees is reached in the afternoon.

Sunday will see again abundant clouds with probably some isolated showers. However, their intensity should not be comparable to the amounts of the two previous days at all. In any case, the race could see one of these showers hitting the track. Temperatures will slightly drop after the frontal passage, reaching highs of 22 degrees at most. The moderate-to-fresh northerly winds will lead to not-so-comfortable conditions for the spectators.

Given the average monthly amount of precipitation (90 mm in October) and a long dry period with much higher temperatures before, this weekend is highly interesting in many meteorological aspects. Temperatures will be below average, as you can expect highs around 29 degrees on a usual day in October in Austin.

This is not the first time that the weather has influenced the Grand Prix in Austin. Although mostly calm conditions have prevailed the previous three years, in 2013 FP1 had to be postponed due to thick fog (pictured).