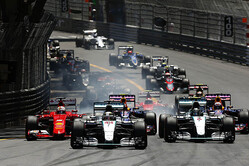 Bernie Ecclestone is seeking to return to V8 engines for F1 even if it means going head to head with the manufacturers.

Never a fan of the new 'green' formula introduced last year, Ecclestone had tried to stall its introduction as long as possible.

Always a critic of the sound, and even the need for an environmentally friendly F1, Ecclestone has looked on in despair as viewing figures tumble in the wake of Mercedes dominance.

The expensive and vastly complicated new power units, though a credit to the sport in terms of efficiency and reliability, have not proved a hit with fans and the confusing rules in terms of development have essentially led to several tiers of racing on the current grid.

Consequently, Ecclestone is looking at a return to V8s, even though such a move would need the consent of the teams in light of the fact that the current rules are meant to be in place until 2020. Nonetheless, the F1 supremo is considering making the move anyway.

"I don't think we should get consent from the teams," he told the {i]Independent. "I think we should just do it and say to them, 'If you don't like it you can go to arbitration'. We could get the V8s back next year. People can build them in no time so we ought to do it."

At the weekend, in a joint interview with Ecclestone, former FIA president, Max Mosley, who was behind the drive to introduce the new formula, warned that the engine manufacturers are essentially in control of the sport.

"The difficulty is that you have to have an independent engine supplier who can supply on a commercial basis," he told ZDF. "The great strength of Formula One from the late sixties until quite recently was that we had Cosworth, Mecachrome and other people making engines so we weren't in the hands of the manufacturers.

"The moment you have one or two or even three manufacturers and they are involved at board level so Mr Zetsche can talk to Mr Marchionne or Mr Ghosn then they control Formula One, you don't control Formula One. At that point the need for an independent engine supplier becomes acute."

"This engine shouldn't have been that complicated, to be honest with you," says Ecclestone. "It was only when the engineers got hold of it that it became complicated. The product is not fit for the purpose."