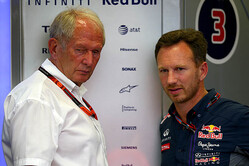 Even if an operative hadn't dumped a load of diesel on to the Sochi track surface earlier today, there is no doubt that activities off track would overshadow anything that was happening on track.

The cement dust in the air was but nothing compared to the buzz of speculation as pundits aired their theories.

Of course, the frantic activity in various motorhomes, Bernie Ecclestone usually at the middle of it all, kept things going nicely, as the fight for the 2015 title found itsself demoted to the back burner behind Red Bull's plans for 2016.

Tobias Gruner of Auto Motor und Sport appeared to steal the thunder when he announced that Ferrari will only supply Toro Rosso with engines next year and will not supply sister team Red Bull.

Which of course, whilst suggesting Dietrich Mateschitz now has no option but to pull the plug, raises the question as to whether the Austrian team already has an alternative supplier.

Could the Milton Keynes outfit opt for a reconciliation with Renault, or can Mercedes offer a solution, ringmaster Ecclestone was clearly cracking the whip in the German outfit's hospitality unit.

And then there is Max Noble's proposition that we might yet see Renault buy Red Bull as opposed to Lotus, or perhaps we could see Christian Horner 'do a Brawn' and run the team... but with what engines.

Even if they manage to spill treacle, vodka or crude oil on the track in the remaining sessions, it's unlikely that anything witnessed on track is going to come anywhere close to the frenzied happenings in the paddock.

If nothing else, Mateschitz and his energy drink is getting exactly what he always craves... publicity.