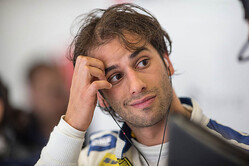 Felipe Nasr has been reprimanded for not following the correct track limit procedures.

As the FIA tightens up on the practice whereby drivers are using all the track and then some, often purely with the aim of gaining an advantage, strict new guidelines were introduced at Monza.

Similar guidelines have been introduced at Singapore also, drivers warned that they ignore them at their peril.

In the opening sequence of corners at the Marina Bay Circuit, in order to prevent drivers gaining an advantage by running wide the stewards have decreed that if a driver does run wide he must keep to the right of an marker board before rejoining that track at T3.

Unfortunately, Nasr "left the track at turn 2 and contrary to the Race Director's Notes of 17th September, did not pass to the right of the red and white block" - a breach of Article 12.1.1.i of the FIA International Sporting Code.

Having admitted that he had not passed to the right of the block, Nasr was handed a reprimand the stewards accepting that the misdemeanour had not happened during qualifying or the race. It is the Sauber driver's first reprimand of the season.

Carlos Sainz was also called by the stewards after he appeared not to slow under yellow flags into T5 in FP1.

However, comparison of telemetry of the lap concerned (his 26th lap) with the previous lap initially indicated that the driver braked late under the yellow flags. However, Sainz explained that the previous lap had been abnormal. A comparison against his 14th lap clearly indicated that he had braked earlier under the yellow flags and had slowed through that section compared to the faster lap. Consequently, no further action was taken.