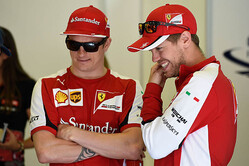 Ferrari has announced that it is to retain Kimi Raikkonen alongside Sebastien Vettel in 2016.

A brief statement issued today, just ahead of the B3elgian GP weekend, read:

"Scuderia Ferrari announces that it has renewed its technical and racing agreement with Kimi Raikkonen. The driver line-up next season will still consist of the Finnish driver and Sebastian Vettel."

Team boss Maurizio Arrivabene has consistently cast doubt on Raikkonen's future with the team, but a strong performance in Hungary, coupled with other car failures the Finn has suffered and a lack of a seriously dynamic replacement, appears to have convinced the Italian to maintain the status quo.

With the Finn widely thought to be key to the 2016 driver market, Williams Valtteri Bottas long linked with the seat, today's news appears to throw a spanner in the works as far as the plans of several teams and drivers are concerned.

Indeed, with the formula largely unchanged next year, ahead of numerous changes in 2017, most teams may opt to follow Ferrari's example and retain their current line-ups.

"What can I say," said Raikkonen following the announcement. "For me, to be able to stay another year at Ferrari means that the dream goes on.

"The Scuderia is my family, as I always said, it’s here I want to end my career. I am more committed than ever and I want to say thank you to the people who gave me this chance. Also, a big thank you goes to all my Ferrari fans, for their continued support."

"We believe that extending Kimi's contract into the next season will provide further stability to the team," added Arrivabene. "This has been our guideline, also considering the very good relationship between Kimi and Seb. On our side, this shows our great confidence in him, and I expect this confidence to be well rewarded."