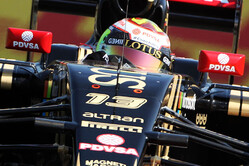 First there was Lotus CEO Matthew Carter blaming the media for the negativity surrounding F1, even to the extent of claiming that Bernie Ecclestone has been influenced by what he had read, hence his disparaging remarks about the sport, including the claim that it is "s**t".

Then came deputy team principal Federico Gastaldi's claim, in reaction to comments made by Emersion Fittipaldi, that it is the media to blame for the fact that many of today's drivers appear devoid of personality.

Now, Pastor Maldonado has taken aim at the boys of the press, accusing them of manufacturing his incident-prone reputation.

"Yes, I was responsible on some occasions," he told Brazil's Globo Esporte, weeks after a performance in Hungary that saw him incur more penalties than an England-Germany football match, thereby bringing his penalty points total to six, half-way to a one race ban.

"I remember an experience that made me laugh," he continued. "This year in China, when Jenson hit the back of me, everyone said I was to blame, because whenever I'm involved everyone says I'm to blame.

"Imagine if it was my car in the crash in Austria," he said, referring to the first lap crash involving Kimi Raikkonen and Fernando Alonso. "If I was involved, it would be a big scandal and there would be huge media pressure.

"This kind of thing is normal between drivers in F1," he insisted. "Everyone is competing, everybody wants to gain positions, they all want to do their best. Unfortunately it has happened to me not once, but on several occasions."