No upgrades from Renault until Sochi 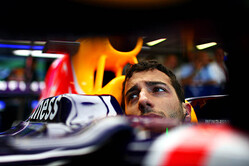 Thanks to the fact that the Hungaroring is not as demanding of power as some tracks, the tight twisty nature of the circuit should suit the RB11, witness the fact that Daniel Ricciardo and Daniil Kvyat finished today's second session second and third.

However, whilst Ricciardo will not be penalised for today's engine failure and along with his teammate should bag some valuable points this weekend, the pair face further pain over the summer and a long wait until Renault's much needed upgrades appear.

Asked to confirm if the upgrades would be ready in time for Spa, as previously suggested, Horner wearily admitted: "I don't think there is anything scheduled now before Sochi.

"That probably is the earliest that we are going to see any form of development or use of the tokens," he continued, "so the engines we've got at the moment are what we're having to live with for the time being.

"So engines four and five of what the drivers have been using between Friday and Sunday racing, unfortunately Ricciardo has now lost engine four, so he's only got engine five, that came into service for the first time in Austria, to get him through the next few races, so only time will tell as to whether we can get to Sochi or not without incurring another penalty before introducing an upgraded unit."

Subsequently asked if the upgrades didn't make any difference does his team have a 'Plan B', Horner said: "Renault would be the first to admit that they're not at all happy with where performance or reliability has been with this engine.

"They are making progress, they are making strides," he continued. "I think the problem with engines is it's - unlike the chassis - long lead-time items. Renault have got strategically some decisions to make over the coming weeks in terms of the direction they want to go along - not just for 2016 but for beyond that.

"We have an agreement with Renault to the end of next year and of course as a partner, we're expecting them to enable us to run in a competitive manner and in order to do that, we need a competitive engine. Of course, Renault need that more than anybody as well for both of their customer teams.