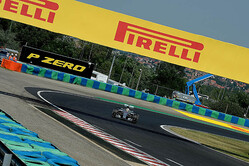 The extreme heat has led to stormy weather as well, with a downpour affecting the area yesterday and more potential rainstorms forecast for tomorrow afternoon - which could affect qualifying.

In the heat of both free practice sessions today, the Mercedes drivers were quickest, with championship leader Lewis Hamilton going fastest on each occasion, using the medium tyre in the morning and then the soft tyre in the afternoon.

So far, the performance gap between the two nominated compounds is in the region of 1.8 - 2.0 seconds, although this margin varies from team to team and is also influenced by track temperatures. The main factor this weekend is set to be thermal degradation, and as usual all the teams used the free practice session to judge how wear and degradation was affected with different fuel loads. But with many of the longest runs interrupted by red flags in both sessions, it was difficult to draw a firm conclusion.

The data will be used to calculate the optimal race strategy: which is particularly important at the Hungaroring, where overtaking is traditionally quite difficult. With two red flags during FP1 and one during FP2, the teams lost a bit of track time. As a result, FP3 tomorrow morning is set to be another important session as teams finalise their preparations for the all-important qualifying hour.

Paul Hembery: "The heat here has been unbelievable and looks set to continue throughout the weekend, although there is a risk of rain as well, as we experienced yesterday evening. In the face of these punishing conditions, the tyres are standing up very well. We'll analyse the data from all the long runs on the soft tyre this evening, but for now at least it's looking like a two-stop race, with a performance gap of up to two seconds between the compounds. However, there were a number of red flags during the long runs, which makes some of the data inconclusive."