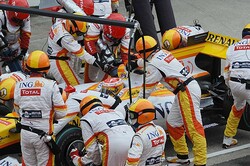 Plans to bring back refuelling in an attempt to spice-up the sport have been abandoned.

Meeting in May, the members of the controversial Strategy Group suggested bringing back refuelling at a time many were complaining that this year's racing isn't exciting and is shedding TV viewers and hitting race attendances.

Refuelling was dropped at the end of 2009 in terms of cost, safety and also the feeling that it was harming the spectacle, turning races into a series of sprints with pit strategy, as opposed to racing, deciding the final order.

As soon as the possibility of refuelling's return was mooted, opinion was divided, in terms of fans, drivers and team bosses.

However, weeks later, at the latest meeting of the Strategy Group, it was decided to quietly drop the idea.

"The view collectively was that it's not going to improve the show and the decision was not to go forward with that," Force India's deputy team principal Bob Fernley told Reuters.