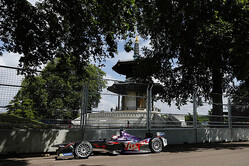 Speaking at a press conference in London, ahead of this weekend's season finale, and at which he confirmed a new multi-year technical partnership between his team and Citroen, Branson was clearly making the most of F1's current "headache".

"I think there’s still going to be room for Formula 1 for another few more years, but I would say there will come a time when Formula E will overtake Formula 1,” he predicted.

"With Formula E, you still hear the roar of the cars through the tarmac as they come around the corner, but at least you can have a conversation and a drink while you’re watching the race which you can’t do with Formula 1.

"I think four or five years from now you'll find Formula E overtaking Formula One as far as number of people," he continued. "As time goes on, the clean energy-type of businesses are going to power ahead of other businesses.

"I personally think things are going to move that rapidly now," he concluded. "What goes on in a petrol-driven engine is complicated and antiquated and out of date and polluting."

Of course, Branson has experience of F1 having been involved with Brawn during its sole year of racing in 2009 - during which the Brackley outfit won both titles - and the Virgin branded team in 2010, which entered the sport along with what was to become Caterham and Hispania/HRT. Virgin itself subsequently morphing into Marussia and then Manor.

An extremely canny operator, it’s unclear how much Virgin invested in its own F1 team, Branson's modus operandi being to 'lend' the Virgin name with the aim of attracting other sponsors, though this clearly didn't work in terms of the F1 model.

Whilst many remain unmoved by Formula E, the arrival of Citroen, which joins Renault and Audi, indicates that the manufacturers see potential.

While F1 clearly has its problems... and then some, the sport is unlikely to feel threatened. Indeed, FIA president Jean Todt, who this week suggested that F1 is suffering a "headache" was keen to play down comparisons between the two disciplines.

"I think it is a big mistake to compare, it's two different things," he said. "It's like comparing London to a city on the beach.