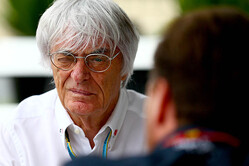 Amidst talk of buy-out of F1, former FIA president Max Mosley believes any new owner would want to keep Bernie Ecclestone on board.

Though they are from entirely different backgrounds, Max Mosley and Bernie Ecclestone established a long running partnership that changed Formula One from a niche sport into the global giant it is today.

Whilst Ecclestone took care of the business side of things, Mosley concentrated on the legal aspects and governance of the sport.

With talk of a US-Qatari buy-out of the sport, certainly CVC's 35.5% share of F1, many wonder whether Ecclestone's reign is finally coming to an end.

"I think it's very early days, because before they make a move they'll do due diligence and that will take some time and a lot will come out about the current state of the sport which may or may not encourage them," he told BBC Radio 5 Live when asked about the possibly buy out.

"Whatever happens, if it is taken over I don't really see Bernie's role changing unless he wants it to change," he continued. "Because he's the person who has managed to sell it everywhere.

"I'm sure CVC have had thoughts about an 84-year-old chief executive," he added. "The fact is there is no one else who does the job as well."

"The thing is, he's pretty amazing the way he keeps going, because most of us, when we get to a certain age, and I'm quite a bit younger than him, feel tired.

“The fact is, he's really interested in what he does, he does it very well, so age tends to be flexible."