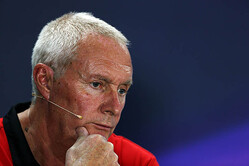 The future of the Manor Formula One team is in the hands of its owner, Ovo Energy boss Stephen Fitzpatrick, according to a report in the Daily Telegraph by Christian Sylt and colleague Katy Fairman.

The team lies in last place after yesterday's Austrian Grand Prix and its performance off track is no better. Its accounts for the year-ending 31 December 2013 were filed last week months late and reveal that the Sheffield-based team is facing a cash shortfall. Crucially, they also state that Manor is "wholly reliant" on funding from Fitzpatrick. He steered the team out of administration in February through a Company Voluntary Agreement (CVA) and appointed former Sainsbury's chief executive Justin Wilson as its chairman.

He adds that on 4 June Fitzpatrick sent a letter to the team committing to provide financial support to enable it to continue as a going concern for at least 12 months. It burned up net losses of È4.7m in 2013, down from È57.7m the previous year. Revenue accelerated from È28.3m to È60.8m driven by payments from its sponsors, including Russian sports car manufacturer Marussia, which replaced debt financing in a È134.9m recapitalisation.

It finished the year in 10th place entitling it to an estimated È12.5m prize money in 2014 but this wasn't enough to prevent it from crashing into administration with total debts of È63.6m.

As Pitpass revealed computer company Dell was owed È390,000 whilst tyre manufacturer Pirelli was due È1m and the outstanding bill to British engineering firm McLaren came to È7.1m. Manor's biggest single unsecured creditor was Ferrari which supplied the team's V6 engines and was owed È15.2m. They were all paid just 1.262p in the pound in the CVA.

The team's main source of funding was investment from Russian businessman Andrei Cheglakov who controlled it and Marussia. The team went into administration in October last year when Cheglakov stopped paying the bills and most of its 170 staff were made redundant the following month. Although the team is back on track the pain hasn't let up and only time will tell how long it goes on for.