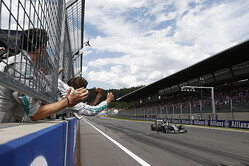 Lewis Hamilton: It was a great feeling to finally get back on top in Canada and add to the great memories I have there. Now, though, it's time to move on and put things right at a circuit I had a tough introduction to last year - Austria. Although I struggled in qualifying, starting down in ninth, it was actually a great race fighting back through the field. I think I was about fourth or fifth by the end of the first lap and then just kept chipping away to claw my way back to the podium, which was really good fun. Of course, I'll be working hard to have a clearer shot at the win on Sunday. Whatever happens, though, you can be sure the atmosphere will be incredible. Last year the grandstands were absolutely packed and the fans were just insane, so I'm looking forward to putting on a show for them.

Nico Rosberg: Canada was really lost for me on the Saturday. Not getting everything together in qualifying hurt my chances big time - but I had the pace and that's a big positive to take forward and go maximum attack in Austria. My first race at this track last year couldn't have been much better. Of course, we didn't have the ideal start in qualifying - but we nailed it on Sunday and it was great to get the win. I'm sure we'll have some tough competition here once again with Williams and probably some others too. But it's a circuit I really enjoy driving and the crowds are unbelievable, so I'm looking forward to getting back out there and having a good battle. Of course, it's a home race for Niki and Toto, too, so we'll need to be on our best form for this one!

Toto Wolff, Head of Mercedes-Benz Motorsport: Coming away with another top result in Canada, it would be easy to sit back and think we've got everything under control. But in reality, this is never the case. Not only did that race require a careful balancing act from the pit wall and from the drivers, but we also saw that there is more to come from our competitors - even if maybe it wasn't clear from the result. There must be more to come from ourselves if we are to continue this good form. Austria will provide a tough test. We had a challenging weekend there last year and fully expect another close competition this time around. The battle is far from over.

Paddy Lowe, Executive Director (Technical): Spielberg is a great circuit - fast and flowing with relatively few corners but some spectacular elevation changes. Last year was, of course, the first Austrian Grand Prix for many years and the crowds were fantastic, creating a really good atmosphere. On track, however, we didn't have our best performance of the season there last time out - despite coming away with a one-two finish. It was a difficult result to achieve - requiring some tight strategy calls to beat the Williams cars. Like Montreal, it's a circuit where the Power Unit will come to the fore. Pirelli have also nominated the soft and supersoft compounds for the third consecutive race which, combined with a very smooth track surface, will create some challenges. After two quite unique circuits in Monaco and Canada, it will be interesting to see how the field stands at a more 'normal' venue.