Lauda: F1 cars should be faster 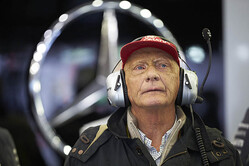 Niki Lauda is the latest world champion to openly criticise the current formula.

In the wake of calls from Nigel Mansell and Kimi Raikkonen that contemporary F1 is too safe and relies on gimmicks, Niki Lauda has become the latest world champion to publicly criticise the sport.

There's too much control, too many rules and no more characters," the Austrian lamented to Bild am Sonntag.

"I'm not saying that we should neglect safety," he continued, "but if the cars were faster, the thrill for the drivers and the spectators would automatically increase.

"You cannot turn back the clock," he admitted, "but the driver should have the car in his grasp, not as now where he is just pushing buttons. It should be about drivers with the highest driving skills… and I emphasize driving skills.

"Any kind of manipulation is the worst thing you can do to a sport," he concluded. "This must not happen."

Lauda, who was so badly injured in a crash at the Nurburgring in 1976 that he was given the last rights, has always been one of the sport's most outspoken participants. The fact that other drivers, world champions, are now voicing their opinions should cause the sport's powers-that-be to take notice, but are they listening?