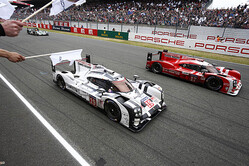 The German, along with New Zealand's Earl Bamber and Britain's Nick Tandy, gave Porsche its first Le Mans win since its return to Sports Car racing (WEC), its seventeenth overall win at the French classic.

Second was former Red Bull star Mark Webber, also in a Porsche, who was partnered by New Zealand’s Brendon Hartley and Germany’s Timo Bernhard. The three had led until late on Saturday when Hartley overtook under yellow flags leaving Webber to serve the resultant penalty.

Porsche's win brings Audi's dominance at Le Mans to an end, the German manufacturer having won all but two events since 2000.

"I enjoyed every moment," said Hulkenberg, "these cars are great fun to drive and then to be on a huge track like this one.

"The pace was really high, and not what you would expect from endurance racing. Especially at night when the temperatures came down a bit, the car was fantastic to drive.

"Of course, I didn't think I would come here and rock 'n' roll this race, this would be silly because there are so many challenges in that race. However, we did it and we did it together."