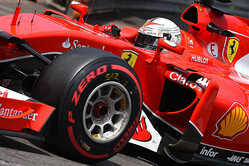 Ferrari boss Maurizio Arrivabene claims that the main reason the team had lost its edge in recent years was down to losing its team spirit.

"When I first came I saw a team that was quite divided," he told the official F1 website, "most of the guys were very defensive and I thought to myself: this is not the team that I recognise. My first task was to put them together again."

Asked about the pressure of running arguably the most famous team in the sport's history, he admits: "Of course I feel the responsibility. That is for sure! But if you remove for a second the pressure that is given by the media it is a wonderful job.

"My dream for years was to one day come back to Italy to do something for my country, and now I've been lucky enough to find the best job that Italy can offer. For that I am very happy.

"Yes, I am surrounded by pressure, but I am also surrounded by good people, and that helps. I try to lead them in the right way without changing myself. I am listening a lot to our president (Sergio Marchionne) who is giving us suggestions, support and who is someone who has a lot to give when it comes to the business side.

"I keep him informed about everything that is going on," he adds. "He is my boss. But how intense the communication is, is dependent on the situation. Sometimes we don't talk to each other for three to four days, sometimes we talk three or four times a day."

Arrivabene joined Ferrari from Philip Morris, owner of the Marlboro tobacco brand, asked if the lack of an engineering background is a problem, he replies: "The team principal is not an engineer. Probably many years ago, but when I think of Jean Todt, Flavio Briatore, Christian Horner or Toto Wolff, they've all won a lot but none of them is an engineer.

"You have to have a 360 degree approach," he continues, "you have to have a clear picture of what is going on and find a good balance between the engineering side and the budget! If you let the engineers go wild you will soon find yourself in bankruptcy. In this respect it is actually better not to be an engineer!"

Indeed, it is the focus on the technical side of the sport, the appearance that it is the engineers who are running the show, that some claim is damaging F1.

"If you take other sports, for example NFL, NHL, NBA, they of course have rules and certain regulations," he replies, "but they are focusing mainly on the commercial aspect of their sports and we most likely are a bit too one-sided. So in the future we have to find the right balance between the genuine commercial interests of Formula One and the technical regulations."

Asked, if the situation at Ferrari is more "comfortable" than a year ago, he says: "I don't think that we are in a comfortable position. But I am pleased that you say so as I am not really somebody who thinks this. If you take the plain results - yes, it's true. But I see it as a situation of a lift that is falling!

"I was very clear at the beginning of the season that for 2015 our aim is to win at least three races," he adds, "and next year to compete for the championship. There is no doubt in my mind that we will be there - we are working hard for it."

Since last year there have been many changes, the departure of Luca di Montezemolo and Fernando Alonso, to name just two. Asked about the Spaniard's claim that he left Ferrari because he didn't want to continue being runner-up, Arrivabene says: "I am thinking about Vettel, about Kimi, and about the team. The team is above everything. And people can say whatever they want. I know that what he said is not polite, but I don't care.

"Everybody is crucial," he continues. "Sebastian is one of the key players, yes, and the fact that he was able to integrate himself in a very simple and nice way is of course helping. Yes, it is crucial that a driver behaves like this. For him it was of course also easy as with joining Ferrari he made a dream come true that he had since he was a kid. But the fact is also that everybody has to play his part rightly - Sebastian, me - everybody in the team has to give his best."

Then, of course, there is Kimi, the subject of much speculation at present. Asked if the team will continues with its current line-up in 216, the Italian says: "That's dependent on the results. If he is achieving the objective that I gave to him - why not?

"I am working for a team with a strong tradition and Enzo Ferrari dictated this tradition," he continues. "For Enzo Ferrari the constructors' championship was always of greater value than the drivers' title. So for us the constructors' championship is very important. To win this title you need both drivers delivering. I talked with Kimi straightforwardly, and he knows very well: the more points he can deliver, the better his chances to stay!"

Asked if he is evaluating other options, he says: "I am concentrating on our two guys right now and I know very well that if needed you can have a driver that is ready to jump in a Ferrari any minute. That is not a problem. The problem is to work with the driver that we have and make sure that he is giving us the best performance."

"I don't like to lose and the team doesn't like to lose, we want to win, of course," he concludes. "But Mercedes have done a great job, so they deserved the championship last year and they deserve the position that they have now. We have to be realistic, but with a strong commitment we have to try our best to make them unhappy as much as we can."