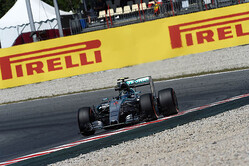 Mercedes driver Nico Rosberg has broken Lewis Hamilton's monopoly of this year's pole positions, going fastest in qualifying for the Spanish Grand Prix, which is sponsored by Pirelli. With track temperatures peaking up to 49 degrees, the P Zero Orange hard tyres and P Zero White medium tyres had plenty of work to do, but once again delivered a consistent performance.

Strategy will make a key difference to the race tomorrow, with the tyre usage pattern already dictated by qualifying. With the medium tyre expected to be the main race tyre tomorrow, lapping Barcelona over a second faster than the hard compound, some of the front-running drivers hoped to get through Q1 using the hard tyre only.

This, however, was no straightforward task due to the difference in performance between the two compounds. In the end, both Mercedes drivers as well Ferrari's Sebastian Vettel managed to get through the session using the hard tyres only: significantly Hamilton set fastest time in the session using what is theoretically the slower compound.

Mercedes maintained its advantage throughout Q2 and Q3, with Rosberg claiming pole position from his team mate. Vettel was third and Raikkonen seventh, but having saved a set of medium tyres (in Q1 and Q3 respectively), the Ferrari drivers are also in a strong tactical position for the race. The top five in Q2 ran just once: again with the aim of preserving as many new medium tyres as possible for the race.

In FP3, run in significantly cooler conditions this morning, Rosberg was fastest on the medium tyres – having also gone quickest during the hard tyre runs earlier in the session.

Paul Hembery: "Qualifying ran along the lines that we expected, both in terms of relative car performance and also tyre behaviour. Wear and degradation are in line with expectations, to make a two-stopper tomorrow the most likely strategy, even though a three-stopper is in theory slightly faster. Track temperatures have been warm today and these are the same conditions that we will experience during the race tomorrow. Consequently the teams should have enough accurate data to formulate the optimal race strategy for tomorrow and work out where they might be able to gain a tactical advantage."

A three-stop strategy is theoretically slightly quicker for the 66-lap race, but doesn't justify the traffic risks involved. Consequently, a two-stopper is actually more likely: especially for the cars at the front of the grid. The best strategy would be start on medium, medium again on lap 23, hard on lap 50. The theoretically fastest three-stopper is to start on the medium, switch to medium again on laps 17 and 35, before a final stint on the hard from lap 55.