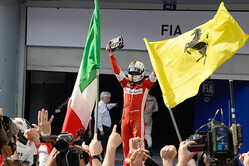 Heading in to the start of the European season, the Maranello outfit appears to be the main threat to champions Mercedes, a far cry from twelve months ago when the Italian team was fourth in the standings only nine points ahead of McLaren with (sixth) placed Williams' revival yet to get underway.

The poor start to the season had already seen team boss Stefano Domenicali pay the price for the team's failure, with Montezemolo to subsequently fall on his sword also.

Speaking to the Italian media however, as Ferrari heads to Spain with one win under its belt, and just 52 points shy of the world champions, Montezemolo has suggested that rather than an inspired management and technical reshuffle and improved car and engine package, the team's form is more about luck than judgement.

"I honestly think they have been a bit lucky," he told La Repubblica. "This year, apart from Mercedes, they have no other rivals. Williams has not improved and Red Bull has imploded.

"In short," he added, "Ferrari starts every race with a podium in its pocket. But luck is useless if you don't take advantage of it.

Appearing to take the credit for Ferrari's return to the front of the grid, Montezemolo says he realised early on that the F14T was not a title challenger and urged the team to begin work on its 2015 contender.

"I called Domenicali and we started working immediately," he said. "We were confident about the chassis: we were back in our new, efficient wind tunnel after years of exile in Toyota's. But I knew we had worked well ahead of 2015. So the moment Vettel crossed the finish line at Sepang, I had confirmation that I had not only left a healthy company, but also a competitive team."

At a time four of the current teams are in financial difficulties, Montezemolo, who enjoyed a long political war of wills with Bernie Ecclestone, warned that the sport faces upheaval.

"I know that (Red Bull boss, Dietrich) Mateschitz is thinking of selling, 'I either convince Audi to enter or I'm leaving', a mutual friend has told me, while McLaren is in crisis."