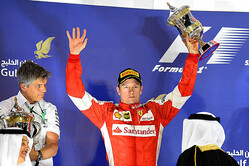 For Kimi Raikkonen this is the first podium since his return to Ferrari. During the race he recovered 19 seconds on Rosberg. This is Scuderia's 684th podium finish. Today the team consolidated second place in the Constructors' Championship with 107 points.

Kimi Raikkonen: "After a difficult year last year and a beginning of the season that was a bit unlucky, it's great to be back on the podium. I have mixed emotions, it's a great feeling to be back, but we want to be on the top. The start was really good , I managed to pass Nico, but then I lost the position and there I lost a bit of time. The strategy was perfect, we did the right calls and the right tyre choice , I was happy with the car , we kept up a good speed through the whole race. In the last laps I was getting closer and closer and could see Hamilton, but the race was at its end, we would have needed more laps to try to do something. I think we are still a little bit behind the Mercedes but in some circuits and some conditions we ca be very competitive, especially in the race. Today we did our best , we have to be happy with the result , we did the maximum and took some good points for the team. We keep improving step by step, we just have to keep working doing the same things in the same direction,and I'm sure we'll get there."

Sebastian Vettel: "It didn't seem to be the perfect day for me. I couldn't get into the rhythm and lost positions when it mattered not to lose them for the final result. In general, I struggled a bit with the rear end and exiting the corners, which made me vulnerable to Nico's attacks and prevented me from getting as close as I needed to Valtteri to chase him down the straight with DRS. Towards the end, I was struggling to get past in the fight against the Williams. When it was important to be quick, I always seemed to get stuck in traffic, and thus damaged my tyres. Overall, though, I think it has been another very positive weekend. It's s shame I damaged the front wing in the race and I had to come in for a new nose, otherwise I think fourth place would have been secured, or even third. Anyway, that's how it went. I was trying to push, and when you're following another car you obviously lose a lot of downforce. With hindsight, it was probably more than I expected. I think I tried a bit too hard and ran wide. On the other hand, I am very happy for Kimi. I'ts good that he was able to pass Nico (Rosberg) towards the end. For the team, it's obviously a great result. It's a long way to go for the season and up to this point we can be very, very happy. It's still a big surprise how good we are but there's still a bit of a gap."

Maurizio Arrivabene: "I am really happy for Kimi: today I can officially state that he's back. He showed what a race animal he is, and if he had had a few more laps perhaps… Also, I am happy for the team, because they worked really well. Sebastian made a couple of mistakes today, one at the beginning, which forced us to change his race strategy, whereas in the case of Kimi we followed our plans. He was not totally convinced about it at a point, but showed a great deal of discipline in following instructions from the pit-wall. As for Seb, he actually made something wrong, otherwise we could have had two drivers on the rostrum; but he's a human being as we all are. He's a fantastic driver and let's not forget now what he has already achieved so far. I wish to thank everybody back at Maranello, because they were able to work on the engine development, but also on every single component, achieving over three months what normally would have required twice as much. I can't tell if we are going to catch the Mercedes, but I do like the idea of putting some pressure on them. Today we were aware of the gap between them and ourselves, and that required an aggressive strategy. Having said that, with regard to the Friday log runs where we had showed a good pace, the temperature was much lower today, and we had to react accordingly."