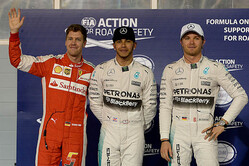 Lewis, your first Bahrain pole - you said on Thursday how important it would be to be on pole this weekend - and an emphatic one as well. How are you feeling?
Lewis Hamilton: I feel great. Feel very happy. Obviously coming into the weekend that was the target - to really try and kind of master this track and get the car into an area I'm really comfortable with and that's generally how the weekend's gone. You know the laps were pretty good; you can always improve. I'm obviously really grateful to have this beast underneath me, which I can really attack these corners with. I think last year I wasn't comfortable with the car to be able to do so, so it's a great feeling.

Well done. Coming to you Sebastian. Obviously you have a front-row start here tomorrow afternoon and with the race pace that you have, what can you do from here?
Sebastian Vettel: Well, I think first of all, I'm very happy with second today. It was a tough session. At the beginning I didn't really find the rhythm that I had also in practice but then towards the end, more and more, I think it was getting better. I was feeling happier in the car and I felt more comfortable to push. So, for now, very happy for the front row and hopefully tomorrow we can have a good start and a good race from there. I think in the race we are maybe a bit closer, so we will see what happens.

Thank you. Coming to you Nico, obviously you've been on pole here for the past two years in Bahrain, but it wasn't your day today. Why not and are you surprised that in dry conditions Ferrari got in front of you in qualifying?
Nico Rosberg: Yeah, for sure, it was just strategy-wise today that I got it wrong, because I was thinking too much about the race and I underestimated Sebastian's speed and also how much it would cost me, and what I mean is that taking it easy in Q2 on the race set of tyres that we start the race with. I just lacked the rhythm as a result. I didn't into the rhythm and I just had one shot at it at the end with a new set, starting Q3 with a used set. So that's where I went wrong today. Disappointed, because Sebastian beat me. If I was second it would have been, still, damage limitation, but being third, that's realty not ideal.

OK, thank you. Coming back to you Lewis, what sort of race do you expect tomorrow? Obviously from Malaysia you have the painful memory of having been beaten by Sebastian, what did you and your team learn from that to avoid it happening again tomorrow?
LH: Well, we've gone over it tons of times already about what we have learned, but it doesn't get us away from the fact that they are very quick this weekend and they are going to be very hard to beat tomorrow, they have great race pace. Hopefully, with our positioning, hopefully that does help and we'll be taking all measure to make the tyres go as long as they do, but I think we're in a good position. Looking forward to the fight.

Lewis, I wonder if we could just talk a little about two words: confidence and consistency. Because, looking at the way you've performed in the first four qualifying sessions of this year so far, obviously you have supreme confidence in the car, and you've been able to find that consistency in Q3 first runs and then more often than not, growth from there.
LH: Yeah, I don't know how I can pinpoint how that has come around. It's just working at it, trying to improve. I guess I've got a nicely calm approach to the way I drive nowadays and ultimately that confidence in your own ability does help. And I guess things that I do outside help me do that. Y'know, the work that I do with my engineers, the notes and all those kind of things. So, I've generally been happy so far but I know I can be better. So, I plan to be that in Barcelona.

Sebastian, I guess the question really for you and Ferrari is the speed of development of this car. You're here on merit, in dry conditions in qualifying, your race pace yesterday looked very, very strong. Tell us a bit about the work that's going on to make that happen.
SV: Well, I think we are progressing as a team. For this race we didn't bring any updates in particular, so it's really that the circuit is maybe a little bit better for us - one. And, as I said, continuously working with the car, getting on top of what to do with the car and learning how the changes are reacting on track. So, I think that's the area where we are making most progress at the minute. We are trying to push on all areas but for now I think we can be very, very happy with where we are. Today is the first time we were able to split them in true dry conditions in qualifying, so very happy.

Nico, from what you were saying from your first answer in the unilateral there about being very focussed on the race tomorrow, it was clear in Q2, you were 1.2s slower than Lewis with the time that got you through into Q3, that you were taking less life out of that set of tyres, that you'd start tomorrow's race on - but from the rest of your answer, does it imply that you didn't really expect in Q3 at the end to be able to get the pole?
NR: No, I did. But I didn't expect to go on used in the first part of Q3. I thought we'd go to new tyres. And I also didn't expect the used tyre to be so slow, like the used tyre was really, really poor. I thought used tyre would be pretty good, especially because I took it easy on that used tyre as well in Q1. But it was really poor. So that meant that I only really had a shot there at the end. And that was poor management. Really, really poor management. Especially because Sebastian's in front of me. Otherwise it would be sort-of OK still but…

Just to be clear, poor management on your side…
NR: My side. Well, together, we always do it together - but I'm definitely largely responsible for that.

(Dan Knutson - Auto Action and Speed Sport magazines) Seb, the wind wasn't as bad as forecast, but even still, there was quite a bit of wind. How sandy was the track and if it's windy tomorrow, how will that sand play into the race for you?
SV: Well, I think the wind was pretty intense. I think we felt it in FP3 but obviously we knew that it would calm down a bit but still, it was very strong, so if you looked around the track, the flags were still pretty alive and obviously every time you have the wind from behind, for all of us, we feel... it easily upsets the car. Tomorrow the forecast is a little bit less so it should get a bit easier.

(Dan Knutson - Auto Action and Speed Sport magazines) Was there sand on the track?
SV: Sand, for me was no issue. Off-line obviously it's a bit critical when you let people by on the out lap etc but yeah, nothing out of the ordinary compared to previous years.

(Andrea Cremonesi - La Gazzetta dello Sport) Sebastian, you have a second engine now, how is the advantage to use the engine looking at the race? You have a practical advantage to using a new engine comparing to other guys who are using a used engine? What are the advantages to using a new engine compared to a used engine?
SV: Well, I don't know. Obviously for us it was always the plan that we do that for this event so obviously not the plan for those guys and others, probably, so I think in the end it's tough for all of the teams to manage the season with the engines we have available. Some teams maybe play around a little bit to use the engine more on Friday and a little bit less on Saturday and Sunday, but as I said, it was always the plan.

(Luigi Perna - La Gazzetta dello Sport) Seb, yesterday you said that Mercedes can turn up the engine in qualifying. Did you use something similar today with the Ferrari, can you do something similar with your car or not?
SV: Well, I think in qualifying you always try to get everything perfect but I think we've also seen last year that Mercedes-powered cars seemed to be able to get more out of their package for qualifying. It's not a secret. I think also if you look in terms of the other teams... with Williams, Force India etc so I think it's pretty common knowledge by now. How much? We don't know. I think they know but as a fact they do... they are able to turn the engine up more than others.

(Livio Oricchio - Globo Sport) To all drivers: all of you used the softer tyre in Q3, Q2 and Q1. How is the situation with tyres for the race? And to Sebastian, can the tyres here be an advantage to Ferrari, as they were in Malaysia?
LH: It's the same as most... there's nothing any different in this session. We've saved a new set of options, option is the better tyre here by far and so that would be the most used tyre tomorrow, most likely. My tyres are good, I think that would be the same for all of us.

NR: Same. Saved a new set of course, for the race, a new set of soft tyres in case the soft tyre is likely to be the better race tyre tomorrow and just need to see. The prime is also a good tyre so both... it's not really too much of a big thing here this weekend, the tyres. Of course tyre degradation, yes, and Ferrari is going to be strong there so that's going to be tough competition.

One additional aspect of that, Sebastian, do you expect as big a difference between you in race conditions as we saw in China, soft to medium, because it was quite big there? Do you expect that again tomorrow?
SV: Yeah, I think we've seen all weekend that, as Lewis said, the option tyre is the quicker tyre, that's why people make an effort to save one set. And then the second part of the question: I think Lewis said earlier that we will be difficult to beat and I hope he's right.