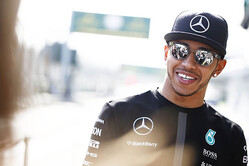 Seemingly on his way to his third title, Lewis Hamilton thinks he is on his best form ever.

With that elusive second title in the bag, next up is the challenge of emulating his all-time racing hero Ayrton Senna and securing that third title.

Following his strong start to the season which includes two wins, a second, and having seemingly already got inside his teammate's head, few would bet against it.

Speaking to reporters in Bahrain, a circuit where he has won (once) but never achieved pole, the Briton thinks he is on his best form ever.

"I'd like to think so," he tells reporters, following a week which has seen him in the headlines for the wrong reasons, incidents he wasn't aware of and the media has taken totally out of proportion.

"Approaching this year I was thinking it's more likely it's going to go the other way, that it wouldn't be as good as it was," he admits. "But I have almost surprised myself, that it has been strong and building on what I did last year, how I have been driving, how I have been adapting to things. I have been really proud of it generally.

"The first one (title) I was so young, and lots of people have had one, and it's been a long, long time since I've been number one," he continues. "You get a kind of extra hop in your walk. It's an amazing feeling.

"When I was world champion before I didn't have that feeling," he admits. "It was different this time, this time I'm aware of it."

Asked about the 'stuff' with his teammate, he replies: "Some people might see that as tactics, to make them think you've got something that you don't. So I don't really pay any attention to it. I take the light side of it and continue to do what I love doing.