Bottas to debut the Williams FW37 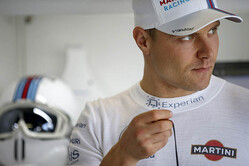 Williams has revealed that Valtteri Bottas will drive its 2015 contender on the first two days of pre-season testing.

Less than a week away from the start of the opening pre-season test at Jerez, and ahead of the launches of the McLaren, Ferrari, Toro Rosso and Mercedes, the Grove outfit is the first team to actually offer a glimpse of its 2015 car... as opposed to just the livery.

This morning, Williams revealed that Bottas, fourth in the 2014 standings, will drive the car on the first two days of next week's test before handing over to teammate Felipe Massa for the final two days.

Thanks to a massive shake-up to its technical team, the sterling efforts of its drivers and the Mercedes power unit at the rear, 2014 saw Williams rise phoenix-like from the disaster of 2013, with many anticipating a further step forward this season.