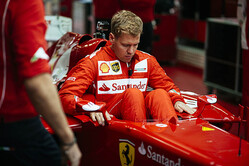 On the back of a season which saw his team fail to score a victory for the first time since 1993, resulting in a major overhaul which has seen a raft of personnel changes, Marchionne believes the engine development loophole is the first step of the Maranello outfit's road to recovery.

Whilst in 2014, the first year of the new formula, power units had to be homologated by 28 February, this year, following an oversight by the sport's governing body, there is no such deadline, leaving the engine manufacturers free to leave the cut-off date much later.

"Ferrari consists of a thousand people who want to win," he told reporters at the Detroit Motor Show, according to Gazzetta dello Sport. "We have already achieved a good result by being able to make changes to the engines. I consider that an accomplishment."

Following a year which saw the Maranello outfit employ three different team principals, Marchionne insists that he will allow Maurizio Arrivabene to run the team and will not try to interfere.

"I would like to say to the Tifosi that I will go to some grands prix, but we have appointed a team principal and he will deal directly with the management of the team," he said.

"Unfortunately we went backwards, but I don't want argue with those who want to create a controversy and instead we will get our heads down to try to return to winning ways."

Marchionne's optimism will be well received by those concerned at his comments last month when he warned that 2015 would be another difficult year.

"2015 will be a difficult year that will put the team to a real test," he told reporters at the team's Christmas lunch. "2015 will be a reconstitution year," he continued. "It will be Maurizio's first full year with the team.

"We started late with the 2015 car, certain choices and strategies that were made by others and that, in retrospect, I don't necessarily share," he added. "So it will be a difficult year, though I think hopefully within the next 12 months we will remove all the baggage of uncertainty that is going to plague at least the initial phase of 2015."