Video: On board the F2012 with Vettel 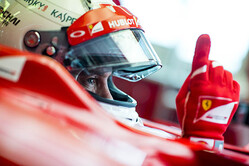 As previously reported, on Saturday, Sebastian Vettel completed his first laps as a Ferrari driver when he took to the Fiorano track in an F2012.

The German did around a hundred laps but it wasn't merely a case of getting to know the team, the track and the car's systems: after a few cautious runs, he began to push and enjoy himself, even though the damp track meant conditions were tricky with less than optimal grip.

In this video, you can see some on-board highlights from that very first run, from which it's clear that he can't wait to get down to work alongside Kimi Raikkonen and the team to get the Maranello outfit back to the top again.

Other than testing the legal limits of the track, in Charlie Whiting's absence, the German even manages a few wiggly-waves to the fans watching progress through the fence that surrounds the circuit.