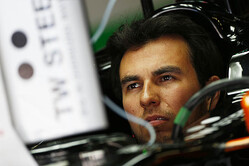 Sergio Perez: "It has been a difficult weekend so far working with the car balance because the windy conditions have impacted on us quite a lot. The wind was always changing direction, making the car quite unpredictable and making it difficult to be consistent. So it was hard to get the perfect lap together. I had to use two sets of soft tyres in Q1 just to make sure I got through to Q2, which meant I only had a single set of new soft tyres to use in Q2. Given the conditions I think we've done a good job, but I wish I could have done even better for the fans because they have made a big effort to come here and show their support. Hopefully tomorrow we can race well and be in the fight for some points."

Nico Hulkenberg: "To begin with, qualifying was going well and I really believed Q3 was possible. On my final lap in Q2 I was on target for the top ten until something really unusual happened because a tear-off visor wrapped itself around my front tyre going into turn twelve. I've never experienced something like that in my career and when I turned into the corner I had no grip, I ran wide and lost a couple of tenths. It was my final Q2 lap so it was quite frustrating and unlucky. Looking ahead to the race, it's going to be tough because the soft tyres are quite a challenge here and we expect more hot temperatures tomorrow. Scoring points will be our aim as we are normally stronger on Sunday afternoon."

Vijay Mallya, Team Principal & Managing Director: "We were probably expecting a little bit more from today's qualifying session, especially considering that Nico has been inside the top ten in all the practice sessions and looked very strong during this morning's session. Ultimately he was unlucky when it mattered today with a strange incident disturbing his best opportunity to make the top ten. Without that he would have made Q3. Sergio has been struggling more to fine-tune the balance here, due in part to the windy weather. However, he pulled together a reasonable lap and he should be able to race well from there."