Marchionne: We've got to kick some ass 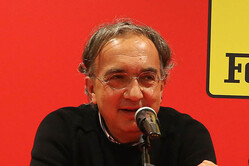 New Ferrari boss Sergio Marchionne, comes out all guns blazing as he vows the Italian team will fight back.

Whilst some fear for the Maranello outfit's future, concerned that the current poor form will continue, possibly even get worse, new boss Sergio Marchionne has sent out a strong message of encouragement.

Though some fear the return of the bean-counters and men in suits that oversaw a long, lean period in the f1 shadows that covered much of the eighties and early nineties, Marchionne appears to be taking his team's return to the front very seriously.

"We've got to kick some ass and we've got to do it quickly," he told Autocar. "It takes what it takes. We might screw up, but we've got nothing to lose, right? Let's risk something.

"I keep getting reminded racing is not a science, that a number of factors influence performance," he added, "then I go to Monza and see the first six cars are not Ferrari or powered by a Ferrari engine, and my blood pressure just popped.

"A non-winning Ferrari on the Formula One track is not Ferrari. I can live with periods of bad luck, but it cannot become a structural element of the brand. That continues to be my main objective in terms of Ferrari going forward."

Brave words, but one has to wonder how exactly the resurgence is going to come about. Whilst the impending arrival Sebastian Vettel will give the team a certain boost, one cannot help but feel that in dropping Fernando Alonso, who has continuously flattered the red cars given to him, the Italian outfit is throwing the baby out with the bathwater, much as it did in firing Alain Prost.

Furthermore, unless the team is willing to go on a massive recruiting drive in the months ahead we cannot see how it has the infrastructure in place to come anywhere near the sort of resurgence we saw under Jean Todt who was to recruit Ross Brawn, Rory Byrne and Michael Schumacher from Benetton, thereby establishing the unit that was to win countless titles and totally dominate the sport.

Nonetheless, it is impressive to hear some fighting talk from Maranello.