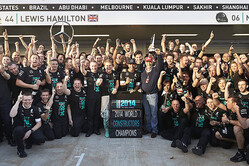 Mercedes has revealed that it boosted its spending on Formula One by 17% to a record £325 million last year according to an article in the Independent by Christian Sylt.

Lewis Hamilton's victory in Sunday's Russian Grand Prix didn't merely extend his lead in the Drivers' Championship to 17 points, it also handed Mercedes the constructors' title. The article reveals that the secret to this success is that Mercedes has turbocharged its spending.

Financial statements for the German manufacturer's F1 engine manufacturing division in Northamptonshire show that in 2013 it spent £133.9m which is nearly double the budget it had just three years earlier. Its costs alone now come to nearly double those of F1's lowest-spenders Caterham.

The increase was driven by F1's switch from 2.4-litre V8 engines to 1.6-litre V6 turbos. Though the engines were initially criticised for losing the high-pitched scream of their predecessors Mercedes has been the biggest beneficiary. It has won 13 of the 16 races so far this season and has been on the podium at every Grand Prix.

In addition to the £133.9m cost of its engines, Mercedes spent a staggering £190.7m on running the F1 team. It is a 26.2% increase on the previous year and comes to the highest amount Mercedes has spent since it took over the team at the end of 2009. It has surpassed the magic number of £175.6m which is the amount that the previous constructors' champions Red Bull Racing spent in 2012 according to their latest accounts.

Mercedes' motorsport boss Toto Wolff says that last year "operating costs rose by £39.6 million due to increased expenditure on in-season upgrades to the 2013 race car; increased costs arising from the parallel car programmes for 2013 and 2014; and increased personnel costs." Testimony to this, the team and the engine division took on 72 new staff during the year giving them a total of 1,186.

There are no curbs on F1 costs and this has fuelled an arms race between the leading teams which attempt to outspend each other in a bid to win on track. A £125m budget cap was due to be introduced in 2015 but was rejected in March by the Strategy Group, a body comprising F1's boss Bernie Ecclestone, the FIA and six leading teams including Mercedes.

The costs of Mercedes' F1 team are partly offset by payments to it from sponsors and prize money which increased last year thanks to a new commercial deal with Bernie Ecclestone. Nevertheless, the team still made a net loss of £51.1m.

Mercedes has a 60% stake in its team with 30% in Wolff's hands and the remainder owned by former F1 champion Niki Lauda.

In contrast, Mercedes owns 100% of the F1 engine division and covers the majority of its costs. They are slightly offset by payments from teams which use its engines. Last year Force India and McLaren had a Mercedes under their bonnets and in 2014 it added Williams to its roster.

This year it also benefits from an increase in the amount paid for the new engines. The V6s are far more sophisticated than their predecessors and their price-tag is double at around £16m annually.

Next year Mercedes will lose McLaren as a customer when it switches to Honda engines. However, it has a replacement waiting in the wings as Lotus, which currently languishes in eighth place, confirmed recently that it will switch its Renault engine for a Mercedes in 2015.

It remains to be seen whether Mercedes will be able to maintain its advantage in future as the Strategy Group recently approved the introduction of limited in-season engine development. However, implementing this requires unanimous support from the F1 Commission which counts Mercedes as a member. Unsurprisingly it has objected so, for the moment, it looks like its huge investment will continue paying off.