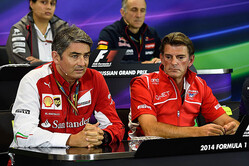 An incident during Friday's press conference suggests Marco Mattiacci might not be the 'soft touch' some believe him to be.

Since he took the reins at Ferrari in April, many have had their doubts about Marco Mattiacci. Admitting that when he was offered the joke he believed it to be a late April Fool, the Italian, with his Mona Lisa-like enigmatic smile, has looked slightly out of place, leaving many wondering whether the former President and CEO of Ferrari North America is a stop-gap.

However, during Friday's press conference we saw different, hard and steely, side of the Italian.

When a pushy, angry Russian journo suggested that negativity about the event in the media originated from the teams, Mattiacci hit back.

"It's a question to the wrong audience," he snapped. "We are team principals, not media moguls so what this theme that the press or someone else takes, to be honest, is not my job or our job to reply.

"I think we're here at a very difficult moment, trying to put in place a decent race," he added. "That's it. About the media spin, I couldn't care less.

The lack of a follow-up from the journo, and the smiles on the faces of Christian Horner, Eric Boullier, Monisha Kaltenborn and Franz Tost, suggests the Italian had made his point... well.