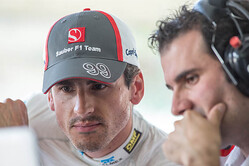 In the first free practice session for the Japanese Grand Prix in Suzuka Esteban Gutierrez and Adrian Sutil worked mainly on the set-up of their cars. However, both Sauber F1 Team drivers were unhappy with the balance of their C33s. In FP2, they were able to make some progress, but the optimal use of the tyres in particular still leaves a lot of room for improvements.

Esteban Gutierrez: "Unfortunately, I lost the car in the second practice session in turn 13. With the speed you get there it was difficult to avoid an impact. I am really sorry for the team, and I am sure we will recover for qualifying. In the first practice session we were struggling with the set-up of the car. I think we found a good compromise in the second session, and we will analyse the collected data to get everything ready for tomorrow."

Adrian Sutil: "In FP1 we had problems finding a good balance for the car. The hard tyres didn't work as we had hoped. There was very little grip, which makes it difficult to set a decent lap time. For FP2 we made some changes to the set-up of the car, which improved the situation with the hard tyres, but then I struggeled with the medium compound. Overall the balance of the car is just not satisfactory. Our main problems are coming from the power unit, which is disappointing. Unfortunately I don't see how we can change that for tomorrow."

Giampaolo Dall'Ara, Head of Track Engineering: "That was not a good day for us. In the morning we had issues with the set-up of the car. We tried to work it out, but we are not quite happy from where we stand at the moment. We struggled to get the hard tyres to work, which has been a problem every time we allocated the hard compounds, and we were expecting to be in a better position here on this track. What was also disappointing was the fact that the improvement on the medium tyres was not as much as we expected. So there is a lot of work to do. Unfortunately, Esteban lost the car in turn 13. On the data we could not see anything wrong with the car, but we still have to analyse what happened. We also had issues again with the power unit on Adrian's car. He had to come into the pits during the first high fuel run in the second free practice because he lost power. We were able to fix the problem by taking oil out."