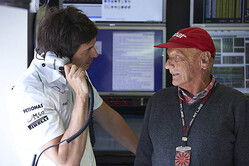 Whilst Bernie Ecclestone refuses to accept the increasing importance of social media, Mercedes takes full advantage of the phenomenon.

Speaking in the Spa paddock, days after ending his bribery trial, by effectively paying a bribe, Bernie Ecclestone was back firing on all cylinders.

Amongst the numerous quips and one-liners delivered to reporters in the Spa paddock was an absolute gem when asked about the prospect of (17-year-old) Max Verstappen lining up on the grid in Melbourne next year.

"I blame social media" retorted the F1 supremo with his customary grin.

Though he continues to shun social media along with much of the other technology that has become so important to most of our lives, others within the sport are not so sceptical.

Today, as it attempts to sort out its 'driver issue' ahead of next weekend's Italian Grand Prix, Mercedes has taken to Twitter to ask race fans what it should do.

Depending on how they feel the German team should handle the situation, using the hashtag #TeamBossThursday, fans are asked to either re-tweet a tweet stating that team orders should be installed to prevent incidents on track or an alternative tweet that calls for free racing between team mates (to be) allowed at all times.

Perhaps, having realised that social media is not going to go away, Bernie might take to Twitter and allow fans to have their say on various issues such as the Russian Grand Prix, the Azerbaijan race or even who should succeed him.

Indeed, we could even nominate people for his hit list... a sort of Ice Bucket Challenge with added vitriol and malice.