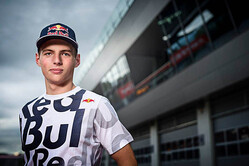 According to the team the move is effective immediately and the 16-year-old will continue his FIA Formula 3 European Championship campaign at the Nurburgring this weekend as a Red Bull Junior in the Van Amersfoort Racing team and additionally will compete at the Macau Grand Prix in November.

Verstappen, son of former F1 star Jos Verstappen, has already established himself as a major talent.

Having started in Karts aged seven, the youngster enjoyed tremendous success culminating in victory in the 2013 World KZ championship, the highest karting category, at the age of 15.

In late 2013 he tested a Formula Renault car at Pembury and subsequently drove an F3 car run by Motopark Academy before a further Formula Renault test in December at Jerez. At a test in Valencia in December he out-paced several older, more experienced drivers.

Contesting the European F3 Championship this year with Van Amersfoort Racing, Verstappen scored a podium finish on his race weekend (Silverstone) and is currently second in the championship following wins at Hockenheim, Spa and the Norisring.

Widely seen as a future F1 star, his father has already hinted that the youngster, who is 17 next month, could join Toro Rosso for 2015.

Today's news would appear to validate that claim.