What was that Bernie? 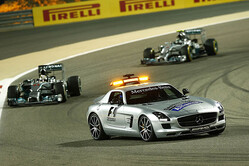 Bernie Ecclestone says he intends to scrap plan for race re-starts, but what about his own dumb idea(s).

From the outset, Pitpass has been vehemently against the plan to introduce the idea of re-starting races following red flag periods from 2015. Even more shocking than the idea itself was to learn that Charlie Whiting was supposedly the 'brains' behind the proposal.

According to reports in the German media Bernie Ecclestone has dismissed the proposal and intends doing away with similar ideas demanding that F1 be a championship of drivers not engineers and rule makers.

However, without any doubt one of the dumbest ideas of recent times - possibly the entire history of the sport - is the awarding of double points for the season finale in Abu Dhabi, though thankfully Bernie Ecclestone didn't get his way and have double points on offer for the last three races.

Should the double points ultimately decide the title it will forever be that little bit tainted, the winner's name always followed by the words... 'yes but...'

On the other hand if the double points aren't required then it will demonstrate just what a dumb idea it is, though Ecclestone will then insist that it should have been for the final three races.

Meanwhile, Katja Heim of KHP Consulting, in the wake of the low fan turnout in Germany, pointed the finger squarely at Sebastian Vettel blaming his negative comments about the 2014 formula. However, surely one of the most dissenting, and loudest, voices in terms of the new rules was her old chum... er, Bernard Charles...