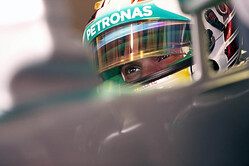 The team's home race, the German Grand Prix, kicked off today at Hockenheim with both Lewis Hamilton and Nico Rosberg topping the timesheets in the first two practice sessions.

Lewis Hamilton ended the day fastest, posting a time of 1:18.341 on the supersoft tyres in the second session. Nico Rosberg lead the way in the first session, posting a best lap time of 1:19.131.

The drivers completed a total of 131 laps today, equivalent to nearly two race distances. Both cars ran trouble-free, allowing the team to test both tyre compounds and work on the weekend.

Lewis Hamilton: It was a pretty good day today. It was quite difficult to find the balance with the track being so hot and it is a tricky circuit to drive in general. The car is a bit different now as everyone made some setup changes in a different direction to what we've had in the past, but it's still fun to drive. As the temperatures were so high, it was difficult for the tyres and we're going to need to manage that carefully when we get to the race. The weather is beautiful and the heat was a challenge, particularly in the car, but that's how I like it. We need to analyse as much as we can tonight and drink plenty as it's going to be hot.

Nico Rosberg: It was a difficult day for us, because we had to work on some of the new settings as the car was running without the FRIC system. But it worked out quite well even in difficult conditions. It was very hot outside and the soft tyres don't last that long here, so this will be tricky for the race. We had a bit of a situation in the pit lane when my teammate came in suddenly just before I was called in too. But the boys reacted quickly and cooled my car and brought his tyres out. It's great to be back in Germany. I really hope for a big German support this weekend here. We will aim to put on a great show for them.

Toto Wolff: This is a tough circuit in terms of performance and reliability - and the conditions couldn't be any tougher, with track temperatures up over 50 degrees this afternoon. We know that we need to be both quick and reliable this weekend in order to deliver on our potential. At first sight, the performance levels looked closer during practice than they were in Silverstone, and both cars ran reliably today on tough conditions. But there is a lot still to do and everybody knows this is a big weekend for us at the home race for Mercedes-Benz. The team has done a great job so far and now we need to carry on in the same way tomorrow and Sunday.

Paddy Lowe: It was great to get running today at the home race for Mercedes-Benz here in Hockenheim. One of the big items to focus on today was to get the car optimised to run without FRIC and I'm satisfied we've done a pretty good job. We ran our normal programme this afternoon, running the prime then the option tyres on low fuel, followed by high fuel long runs on option then prime. It was important to do the right homework today as Pirelli have brought a very aggressive choice of compounds this weekend, so we needed to dial the car into using the tyres properly, especially in the high temperatures today. The drivers were reasonably happy but we also saw that some management was necessary in order to maintain tyre performance over the long runs. I also want to say well done to the team and especially the guys in the garage, who delivered two busy sessions in very demanding conditions without any issues.