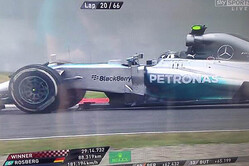 Following a Spanish Grand Prix that promised much but, according to Glen Crompton and Mat Coch, delivered so little, it was with great trepidation that, in the absence of Editor Balfe, we let the antipodean duo loose in the Pitpass studio for the latest podcast.

Though the pair rarely agree on anything – unusual considering the sport they cover - both acknowledged a fine performance from Sebastian Vettel, which Crompo says is the first drive worthy of a champion he's put in thus far in 2014.

Naturally though they couldn't let the opportunity pass without heaping more praise on countryman Daniel Ricciardo, suggesting that perhaps there is a rather more harmonious working relationship behind the doors at Milton Keynes than the selected radio messages broadcast on the global feed might suggest.

For his part Coch raises questions about the situation at Lotus, which the duo decide shall be called Enstone for simplicity’s sake, in light of comments made by Renault over the Spanish Grand Prix weekend. There is also an eyebrow or two raised over Pastor Maldonado's weekend and the Venezuelan's various incidents.

Then there’s Coch’s well spotted mistake just twenty laps into the race when Nico Rosberg was being credited as the winner… wishful thinking on behalf of FOM and CVC as Hamilton looks set to romp to the title?

Crompo meanwhile can't resist having a dig at Kimi Raikkonen, who he suggests is turning in to a modern day Jean Alesi while Ferrari as a whole is gradually falling off the boil.

Special mention however is reserved for Lewis Hamilton with Crompo and Coch thrilled at the 2008 world champion’s return to form. According to Crompo, Hamilton is unbeatable on his day and is similarly impressed that Nico Rosberg has managed to push him hard, high praise indeed for the young German.