Allison: We are aware of the size of the challenge 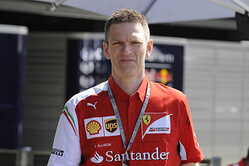 Following a mixed performance in Malaysia, Ferrari Technical Director, James Allison, insists that the team is pulling out all the stops in its efforts to catch Mercedes.

"We cannot be happy with today's result," said team boss Stefano Domenicali in the wake of Sunday's race, "because even if, on the one hand we managed to claim a fourth place that sees Fernando stay third in the drivers' classification, on the other hand, Kimi failed to score points when they were well within his grasp."

Having looked impressive for much of the weekend, the Finn's race essentially fell apart when he was clobbered by Kevin Magnussen at the start of the race, necessitating an extra pit stop.

That said, neither Raikkonen nor teammate Fernando Alonso were likely to challenge Sebastian Vettel far less the Mercedes duo, Lewis Hamilton's best lap over a second quicker than anything the Spaniard could muster.

With the third round of the season just days away, Ferrari is unlikely to make any inroad to Mercedes advantage in Bahrain, but Allison insists that work continues on all fronts.

"We are working in a constant way and with the highest levels of dedication in all the areas of potential development," he said. "We brought a useful upgrade to the Malaysian GP and were duly rewarded with a more competitive performance than at the first race, but the whole team is in no doubt about the size of the challenge that remains ahead of us this season.

"We are not disregarding anything," he continued. "Much has been spoken about the new power units on the 2014 cars, but it is rarely mentioned that 1% of engine power is not so different in its effect on the stopwatch as 1% of aero efficiency.

"Our development programme will keep delivering steps to the efficiency of the F14-T; aero, power unit, mechanical grip - race by race these steps will help to hunt down those in front.

"If we can keep up the progress that we made between Melbourne and Malaysia then it will start to tell in both in grid positions and in the Championship."