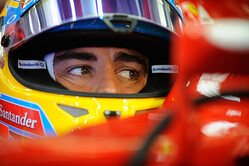 Fernando Alonso: "I am really pleased with this fourth place, because to get into Q3 with the problem I had with the steering is really a good result. In a season when it takes a lot of time to make any sort of change to the cars, the guys managed to change the suspension in just a few minutes, which is a real record. They also got me back out on track at the right moment, which meant I could get into Q3. The incident with Kvyat was unfortunate for both of us and was inevitable, because by the time I saw the Toro Rosso it was too late. As usual in the rain, visibility is significantly reduced and it becomes a lottery. The team was super again in Q3 when it was a case of working out when to fit the set of new Extreme Wets we had: we did it at the start when the track conditions were better and so we were immediately able to do a quick lap. Starting from fourth and sixth places, I think the podium is possible and, apart from the form shown by Mercedes, the performance among those chasing them is reasonably close. This weekend, we opted to work more on race pace than on our single lap performance and the feeling is positive. But we know it will be tough and the uncertainty over the weather means it's hard to know what sort of race to expect."

Kimi Raikkonen: "The rain made this qualifying very difficult. I knew that in the wet it would not be easy, but I didn't expect to have so many problems. I had poor traction and on top of that, with the Extreme Wet, for some reason I was losing grip after the first lap. Now we have to find out why, as it will be useful for the coming races. Cleary, I'm not happy with sixth place, but given the circumstances, I cannot say I'm surprised and now I only want to think about doing well tomorrow. It will be a tough race with particularly high temperatures, but I am reasonably confident, because we have gone better here than in Melbourne and if we don't have any problems, we can think in terms of getting a better result. Overall, my feel for the car is improving and even if there is still a way to go, we are working in the right direction."

Pat Fry: "We can regard this as a positive result. Qualifying was extremely close because of the weather and also because of the condition of our cars. The start positions are not really those we were aiming for, but all the same, they show the team is working in the right direction to close the gap to Mercedes. Q1 was relatively straightforward to read and then the mechanics did an amazing job on Fernando's car, changing the steering arm in just a few minutes, after the collision with Kvyat's Toro Rosso. He was back on track in record time and from then on, Fernando still had to fight to control the car and I think, in that situation, not many drivers could have done the lap he did in Q3. He really deserves our congratulations. Kimi's performance was no less impressive: we know he's not yet completely happy with the feeling of his F14 T and in the wet, he had some car balance problems, but I think he can have an attacking race from where he is on the grid. Once again here, Mercedes is setting the pace, but we will try and make the most of any opportunity, although the priority is to finish the race, because more than ever this year, you can't take reliability for granted."