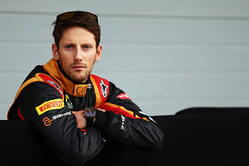 Romain Grosjean and Pastor Maldonado endured a frustrating first day of the 2014 season with the E22 at the Australian Grand Prix in Albert Park with both drivers completing limited time on track.

Romain Grosjean: "If we take the positives we can say that we've completed a few practice starts, and we've proven that Renault have done a good job from the laps we completed. It's certain that we have a lot of work ahead and we still need to learn the tyres, the brakes and find a good setup. We're taking a few steps every time we go out in the car and for sure we'll get where we want to be."

Pastor Maldonado: "I'm feeling really ready for tomorrow. I spent a lot of today waiting to get in the car as we had some problems, which I think are still normal to have so early in the season with these new cars. It was clear that we're not the only ones to suffer on track and we have to work very hard, and maybe harder than the others, to try to catch up and be ready for tomorrow. We need to sit down with the engineers and re-plan our strategy for free practice."

Nick Chester, Technical Director: "We experienced quite a few issues today. We were delayed getting Romain's car out in the first session due to a gearbox fluid leak whilst Pastor had an electrical problem. Part of Pastor's issue was related to the wiring loom, which we needed to replace. The looms are so complex for the latest generation car that this meant Pastor missed the second session. Romain managed track time in the latter session, and we have seen that Renault have made great steps in the driveability of the power unit. With today's issues behind us, we're hoping for a much better day tomorrow."