Ecclestone reveals why he named Horner as his successor 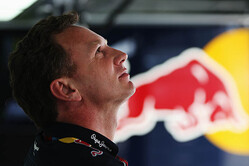 In recent days there has been a resurgence of reports about Christian Horner taking over from Bernie Ecclestone as the boss of Formula One. Ecclestone has now revealed why Horner's name was mentioned and a source close to F1's controlling shareholder, the private equity firm CVC, has confirmed that it isn't planning to replace the 83 year-old according to an article in the Guardian by Christian Sylt.

The reports about Horner taking over F1's driving seat first emerged in December when Ecclestone was quoted saying that Horner would be his "ideal" successor. "It needs someone who knows the sport. If someone comes in from outside, a corporate type, I don't think I could work with them. It wouldn't last five minutes," said Ecclestone.

However, following these reports Pitpass revealed that Ferrari chairman Luca di Montezemolo could block the appointment of Horner. This is because di Montezemolo can veto Ecclestone's successor if in the past five years they have held a senior position at or owned 5% or more of any team or automobile manufacturer which either owns more than 5% of a team or supplies engines to a team.

It wouldn't be a surprise if di Montezemolo exercised his veto over Horner. In the wake of the original reports he said on Italy's RAI television "Ecclestone sees Horner as his successor? As the years go by, he more and more enjoys making jokes and I'm happy he still has the desire to do so."

So what sparked the reports about Horner's appointment and why have they resurfaced despite the evidence of di Montezemolo's veto over it? The original source must have been pretty persuasive. Indeed, it was none other than Ecclestone himself up to his old tricks.

The question of Ecclestone's successor is hypothetical at the moment as although he is facing a bribery trial, a source close to CVC says "we don't have any changes planned at the moment. The board constantly reviews facts and circumstances and the current position is that no changes are planned."

The bribery trial will take place in Munich in April. It has been fuelled by a $44m payment by Ecclestone and his Bambino family trust to Gerhard Gribkowsky, a former executive at German bank BayernLB (BLB) who was responsible for selling its 47.2% stake in F1. Prosecutors believe that the payment was a bribe to steer the sale of the stake to CVC in 2006 as it had agreed to retain Ecclestone as F1's boss.

Ecclestone recently won a related civil case in the High Court in which he was accused of undervaluing F1 through the alleged bribe because other bidders may have paid more than CVC. Although Ecclestone won, the judge, Mr Justice Newey, ruled that "the payments were a bribe...under which Dr Gribkowsky was to be rewarded for facilitating the sale of BLB's shares in the Formula One group to a buyer acceptable to Mr Ecclestone."

During the trial in November CVC co-founder Donald Mackenzie said "if it is proven that Mr Ecclestone has done anything that is criminally wrong, we would fire him." The source says that CVC has decided to base its decision on the outcome of the trial in Munich, rather than the High Court ruling, and believes that F1 has not been dented by the scandal.

"People have come out of the woodwork making offers thinking that it is opportunistic to do so around this court case but the proof of the pudding is that no one has sold anything. If people were running for the door you would have seen some share sales but not one share has traded and I think people believe in the fundamental value of this business."

Ecclestone says that "F1 is a better company to buy than a lot of the companies that are being sold." He adds that "enough people tried to buy, people that I know could buy with no problems at all financially, but it's incredible because CVC don't even bother talking to them. They don't want to sell. That's the bottom line."

In February it emerged that American billionaire John Malone's Liberty Media had teamed up with Discovery Communications to consider mounting a bid for F1. Pitpass revealed that Ecclestone knew nothing about an alleged takeover and, reflecting this, he says "Malone is the sort of company that could buy. I can't say who are the latest people who want to but I know there isn't a sale on the cards."

However, he adds that "the way CVC are structured, I think they eventually have to sell, not just this company but any company. They can only keep for a certain period." The private placement memorandum for the fund which owns CVC's F1 stake states that the term is "ten years, subject to three discretionary one year extensions" which means that it has to dispose of the stake by 2018 at the latest. Time will tell who becomes F1's new owner.