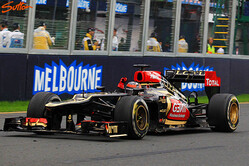 The Australian Grand Prix is poised to remain in Melbourne beyond 2015, when its current contract is due to expire.

Speaking with the Herald Sun Ecclestone all but assured Melbourne of a race in future, claiming that a new contract "will happen".

Key among the requirements during renegotiation was what Asher described as "good value for money", or put more simply, a lower hosting fee. Though Australia is far from the top paying grand prix host by 2015 it is expected it will pay Ł19m simply for the rights to host the race. With the Victorian State Government underwriting the event, which has made substantial losses in recent years, reducing the deficit was a priority in the government's eyes; locals see it as either a frivolous waste of tax payer money or an investment in the Victorian economy with no middle ground.

"I think that's all been sorted," Ecclestone claimed, going on to suggest that the deal was more or less done, with only the finer details to be confirmed.

"Ron (Walker) and I know what we're doing," the 83-year-old teased, refusing to be drawn on the length of any extension.

"We're happy with Melbourne, they seem to be happy with us, so I suppose it will be all right."