Allison says all is going to plan at Ferrari 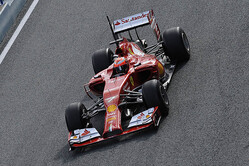 With pre-season testing at the two-thirds stage, Ferrari's Technical Director, James Allison believes all is going to plan for his team.

While the Mercedes-powered teams clearly have the edge, especially the works outfit and McLaren, at this stage Ferrari appears to be the only other team that might give them a run for their money, even if the true state of play isn't known yet.

"We came to Sakhir aiming to work steadily through the huge list of actions that we must complete," said Allison ahead of this week's final test. "We wanted to maximize track time, working methodically in order to be ready for Melbourne. I have to say that, with the exception of the morning of the third day, we did just that.

"We worked on learning how to get the best from the 2014 clutch and on tuning the new brake by wire system," he continued. "We looked in detail at balancing the temperature of all the cooling fluids, a key part of this year's rules, and we began gradually expanding the operating window of the new Energy Recovery System.

"We have been able to start to open up our understanding of the handling characteristics of the car and to begin to learn what sort of setup parameters the tyres respond to. Continuing with this work will be an important part of the programme over the last four days here in Bahrain.

"For the last four days, our programme will see us attempt to operate the car ever more closely to the way that it will run in a race," he admitted, "providing invaluable practice for the drivers and subjecting the car and all its systems to the full rigor that it will need to withstand throughout the season."