The death of FOTA? 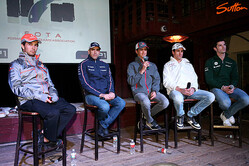 According to reports the teams' alliance, the Formula One Teams Association (FOTA), has until the end of the month if it is to survive, far less flourish.

Whilst reports of FOTA's death may be greatly exaggerated, to paraphrase Mark Twain, there is no doubt that the alliance, formed in 2008 at the height of the budget cap row, has lost its teeth, its bite now seemingly no more than an irritating nip since Ferrari and Red Bull jumped ship in late 2011.

Formed with the intention of providing a united front for the teams as they faced up to Bernie Ecclestone and the FIA, then led by Max Mosley, there were problems from the outset, Williams and Force India both being suspended early on for not agreeing to sign up to the proposed breakaway series the Grand Prix World Championship.

Despite much huffing and puffing, including walking out of meetings with the FIA after failing to agree on rule proposals and the establishment of a breakaway series, the alliance, which at one time included eleven of the twelve teams participating in F1, gradually began to fall apart.

The original president, Luca di Montezemolo handed over the reins to Martin Whitmarsh in 2009 and while FOTA was instrumental in agreeing the 2010 Concorde Agreement since then its influence has waned, the organisation seemingly focussing on 'fans forums' rather than tackling the sport's powers that be head-on. Then again, the loss of Ferrari and Red Bull, along with Toro Rosso and Sauber has hardly helped.

Formula One has always been dominated by the self-interest of the individual teams, as competitive in meetings as they are on the race track, and it is this inability to agree, to work together, that has allowed Bernie Ecclestone to flourish.

With the teams constantly at one another's throats and suspicious of one another to the point of paranoia - just look at the Resource Restriction Agreement and the subsequent fall-outs over its policing and implementation - Ecclestone has barely needed to 'divide and conquer', the teams doing his work for him.

According to the Daily Telegraph, FOTA is now "suffering substantial financial problems", as are several of its members, a situation not helped by Martin Whitmarsh's disappearance from McLaren, the Englishman's departure leaving the alliance without a high profile face in the paddock. The situation is not helped by the fact that FOTA's vice chairman Eric Boullier has succeeded Whitmarsh at McLaren where the team is said to have been uneasy with the Englishman's role within the alliance.

As the alliance looks to the future the seven remaining teams have been sent a new mandate, but, as ever, agreement will not be straightforward.

"I can confirm that the teams have met in discussion as to how to potentially restructure the association and continue and further the engagement with the non-members, who have benefited from FOTA activities over the last 12 months," FOTA's secretary general Oliver Weingarten told the Daily Telegraph.

The battles with Ecclestone and the FIA were bad enough but the prospect of big (profit hungry) businesses ruling the sport and two of its star turns having jumped ship leave the surviving members extremely worried.

"We have to recognise that it was a lost opportunity," admits Bob Fearnley at Force India. "I don't think there's any question about that one, but we can't undo where we are today. Unfortunately we lost that opportunity to be able to collectively work and come to an agreement with the commercial rights holder, but that's it.

"Naturally Bernie would have seen it as a threat, when you're looking at doing collective bargaining", he added. "But when we're looking at building fan forums and working for the promotion of Formula One, then obviously we'd like to do it in conjunction with Formula One Management. We're trying to align ourselves with them and enhance the process."

"I think it would be unfortunate if there wasn't a forum for the teams to discuss issues", added Marussia CEO, Graeme Lowdon. "The teams should have common objectives. We certainly experience a lot of the same things. We all work to the same rules, go to all the same places. In a truly efficient structure, there would be very much an important role.

"It's difficult when you've got some teams whose primary objective is financial survival, and others is to promote a product," he added.